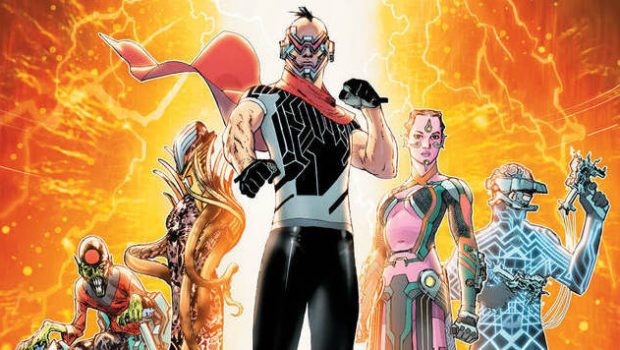 Summary: Engaging art and story make for an enjoyable read.

Round One: A Far Better Thing

This is the first issue in the new Electric Warriors mini-series set 700 years in the future.  In that time animals have evolved into humanoid creatures, and humans are a recovering species.  In fact, they have only just regained personhood status.  The series centers around a competition known as the Covenant, where member worlds elect champions to fight for their worlds.  It looks like a futuristic Hunger Games. Electric Warriors #1 features two covers.  The standard and a variant.  The standard cover features the five Electric Warriors standing front and center.  There is a bright orange energy in the background.  They all look both alien and futuristic, but what stands out the most is the colour.  It is bright, vibrant, and draws the eye in immediately.

The variant is far more stark.  It does feature the entire group of Electric Warriors, but in more muted tones than the standard cover.  The background is white, with the hint of a grid visible.  The characters look more human on this cover, and it just doesn’t capture the eye the way the standard does.

Travel Foreman did a good job on the art in this book.  It carries a futuristic feel throughout.  The animal places are far more bright and exotic, especially underseas.  The human territory is drab and run down looking, underscoring the oppression that humanity has faced for years.  The human neighbourhoods look run down, crowded, and impoverished.  Even the humans are drawn as smaller and weaker than the animals.  As such, the art does a great job to bring this future world to life.

Where it really shines is the colouring.  Hi-Fi handles the colouring duties, and makes the artwork really shine.  The future world is incredibly well coloured, with bright lights throughout the animal bar at the beginning, the drabness of the human neighbourhoods, and underseas.  The visuals of the octopus lightspeak is particularly eye-catching, and draws the reader’s eye in immediately.  It’s just plain beautiful to look at and belies a grace that this species carries within them that truly sets them apart from the other animals.

Set 700 years in the future, conflicts appear to be settled via fights to the death by champions imbued with Electric Seeds.  This time around Earth is granted the honour of two champions.  The first is an octopus, and the second a human.  This is a first, as no human has ever carried this honour.  Ian Navarro takes his brother’s place to spare him having to fight to the death, and Kana serves as the representative from the beasts.  It is clear that there is a great deal of animosity between Earth’s human and beast races, and Ian’s fighting in a beast bar at the beginning of the issue shows that while there is peace now, it is still uneasy to many.

There are also mentions of Superman throughout, but how he’s viewed differs widely.  Some view him as a hero to all, while others feel that he created a world where humans were overly dependent on him and unable to defend themselves.  The issue also ends for a familiar face, whose appearance was quite unexpected.

Though the first issue only introduces two of the Electric Warriors, they are well rendered.  Ian is angry and fighting to save his brother, whereas Kana sees the role as a great honour.    The issue sets a good stage for the state of Earth in the 2700’s, creating an interesting world that does include references to the distant past by mentioning Superman.  All other heroes are not mentioned, perhaps as they’ve been forgotten.  Maybe that’s something to be touched on in future issues.

This mini-series has a good start, and while it opens with a fight, the rest of the issue is setting the stage and fleshing out this new world.  The art and story are engaging, but it’s the colour work that really shines in this book. 4 out of 5 stars.