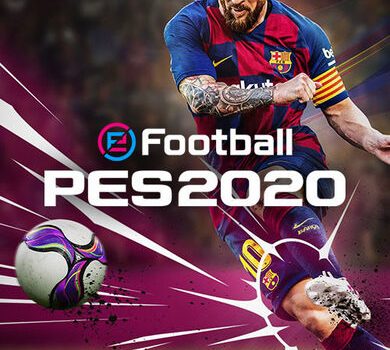 Summary: Konami once again delivers a beautiful game of football surrounded by some of the ugliest, laziest trappings possible

It feels unfair but the Pro Evolution Soccer series can’t be written about without mentioning EA Sports juggernaut FIFA series. FIFA continues to hoover up exclusive licenses for players, clubs, competitions and dominates the sales charts. Pro Evolution Soccer on the other hand is a scrappy underdog. Fans of the franchise continue to shout that PES plays a better game on the pitch. So, has anything changed this year? Yes and no. One huge change is Konami finally getting to give EA Sports a taste of their own medicine. This year eFootball PES 2020 (yes, it’s a ridiculous name) has gained exclusive rights to Juventus, forcing FIFA to sub in a team Piemonte Calcio. This is something of a coup for Konami, who for years have been forced into using ridiculous team and player names. In addition to this, they’ve secured a number of licenses from multiple clubs around the world. It doesn’t compare to the pure might EA Sports have but it’s something.

It helps that Konami have become more brazen about the teams they don’t have licenses for. No more Tyneside and Merseyside Red, these have now been replaced by the very cheeky Newcastle WB and Liverpool R.

The more famous and recognisable players also receive pretty faithful avatars with one caveat, when they open their mouths they look like interdimensional demons. Less famous players suffer from more generic representation which can be distracting but ultimately doesn’t detract from enjoyment of the game. Besides, any PES fan worth their salt will be downloading option files that spruce up the kits, the stadiums and the chants to a more realistic version. The game of football has always been where PES shines and PES 2020 is no exception. In fact, it may be the best version in years. The first big upgrade is the use of their new camera mode, stadium. Stadium begins the same way the default camera has for years but changes angles depending what is happening in the game. As players get closer to a goal it will zoom in. It makes for a more dynamic experience that is similar to watching a TV broadcast. The shifts aren’t jarring, and follow the game naturally.

The pace has been slowed down this year as well. Everything feels a bit weightier, but in a way that makes the experience feel more authentic. Using the weight of the players and the shifting of that weight is more important, something made apparent with the new finesse dribbling system.

Finesse dribbling is one of the big additions to this year’s PES. The system was developed in consultation with Andres Iniesta and it adds a whole new element to the game.  Using the right stick the players control the ball at close quarters and with a couple of flicks can drop their shoulder and storm past defenders. It sounds a lot like FIFA’s skill stick, but it comes off as less of a showboating trick delivery system. Instead it feels more like natural dribbling, and finding space through the use of turns. Another big new upgrade is the context sensitive kick accuracy. Basically, this means that your posture and movement will affect the accuracy of a pass, cross or shot. If a player is moving too fast, it means they will not hit the ball as sweet as they would with better control.  It leads to more dramatic moments in the game, and makes timing all the more important.

Once again, the ball just feels slightly more natural than FIFA. Konami has definitely been tweaking the physics here a little as it is an upgrade of previous versions of PES too. The ball just feels right. It also has a number of great reactions to the surface and the players. In my play time I have seen subtle little bounces depending on the condition of the surface, and some very entertaining deflections. One time a rather tame shot of mine hit a defenders outstretched leg and sending the ball flying over the unaware keepers head. Stuff like this makes the game exciting and adds to the realism. After quite some time playing I’ve only noticed two real flaws. The first involves the AI. For the most part the AI is extremely on the ball. Players find space and make runs into channels effectively. However, defenders sometimes seem to ignore loose balls entirely. I have scored and conceded goals where the ball bobbles past a defender as he watches on and allows a striker to nip in and grab it. It is frustrating and seems like an odd bug, considering the standard of the rest of the game.

The other flaw I noticed was the referees. They’re all over the place. Whether this is designed to represent the often-inconsistent refereeing of real life, or is just a design flaw is hard to tell. But there will be times where you scream at the screen in frustration as the referee awards a penalty for nothing.

It is a pity that the modes surrounding PES’ excellent gameplay are so thoroughly mediocre, and presented even worse.  Master League’s latest innovations just seem to be “let’s copy FIFA entirely” but make it look worse. Master League now has added cut scenes where you can interact with your staff, players and the press. But it does nothing. It has no tangible effect on the game and the scenes themselves are so generic you’ll find yourself skipping them quickly. The transfer market in Master League has seen a bit of an improvement. More realistic offers are the order of the day. But for the most part you will just find yourself advancing the calendar so you can play a damn game.

MyClub is now probably PES’ best mode. Like FIFA Ultimate Team, MyClub sees you building a dream squad of past and present players. Unlike Ultimate Team, MyClub is much less reliant on using your wallet to get a result. Microtransactions do exist, but you won’t be opening packs continuously. In fact, you can build up a decent team without spending any money at all. As per usual the presentation of the game is a severe let down. Bland menus, bland music and awful commentary are par for the course for PES. You do really wish they’d give it an overhaul, as it’s becoming harder and harder to justify paying full price for such lazily assembled content.

Ultimately the question everyone is asking, is it better than FIFA? It comes down to personal preference. PES 2020 undoubtedly plays a better more compelling version of the beautiful game. But some people will never get over the unlicensed content, and the extremely little effort Konami seems to place on anything outside of the on the pitch action. The effort Konami has made into the on the pitch action deserves notice. T hey’ve once again tweaked the formula and made an exciting yet realistic game of football. Not quite a wonder goal, but you’ve got to appreciate the effort put in.