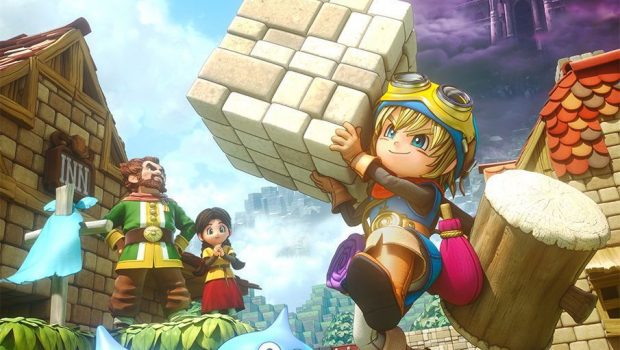 I’ve always been a Minecraft fan, but part of me yearned for a bit more story in my crafting-sandbox simulator to keep me motivated. I love exploring new lands and making new things in these sorts of games, but a hybrid role-playing game with staples like lore, NPCs and quests was something I always wanted. Dragon Quest Builders fulfills part of that craving, and serves up a fun and light-hearted action-RPG/crafting mash-up that fans of both franchises will enjoy. Set in an alternate version of world of the original Dragon Quest game, Alefgard is overrun with monsters and filled with people who have forgotten the skills required to build. The evil Dragonlord tricked the original hero and as a result Alegard has crumbled into a dangerous untamed land. Your protagonist (you can choose your gender and customise basic appearance from very limited options) rises to face this challenge but is promptly informed by a disembodied voice (your invisible guardian) you’re a Builder, a special type of hero who can reshape the world. It’s a simple but engrossing premise, and your hero even falls sleepy from the explanation, humour typical of the clever and engaging writing consistently present in the DQ franchise.

Off to your Builder goes then, to travel amongst the various worlds to clear the landscape of monsters and build anew. The basic gameplay loop of survival sandbox crafting then kicks in: defeat hostile creatures and monsters, gather materials from the land and build all the things! There’s four chapters with different types of monsters and terrain spread throughout the game, with distant lands and exotic buildings in the distance, teasing you at what awaits around the corner and inviting you to explore it all.

Most of the early game will be spent learning the mechanics, but thankfully DQB explains things well and is fairly straightforward even for those who don’t play many crafting-based games. For those who simply wish to enjoy the building mechanics, completing the first chapter of the game unlocks such a mode where you don’t have to worry about a linear story at all, and you can share your work online to show off.

After building your first bedroom and basic tools and weapons, you’ll move onto bases, barricades, castles, shops and other safe structures. All of these facilities require certain elements within them to be classified by the game as such, but the requirements were always fun to match. Soon, these structures will draw surviving humans seeking sanctuary; from here the game begins to open up as said NPCs explain the lore of Alefgard, gather more materials for the player to use and grant more tasks to engage in, such as building more complex facilities like an armoury. After gradually gaining access to blueprints to craft new armour and weapons, I fell back into the addictive formula typical of Minecraft and Terraria, the one which starts with the functional and practical crafting and ends with the cosmetic and grand. If only the combat was as engaging. Being an action-RPG rather than a true role-playing game with deeper stats systems, fighting monsters in DQB essentially boils down to hitting said enemy with whatever weapon you have equipped until their health-bar drops to zero. Because the only reward is more materials and actual experience points for levelling are granted for building and completing tasks for your towns, combat can be a bit dull and it’s obvious it’s the lesser focus here than the crafting elements, which will be fine for most. Each chapter has a boss fight which involves a little more intracy in the fights, namely building and using unique weapons to defeat such grand enemies, but still, I had hoped for more depth in its offerings.

The artstyle and graphics in Dragon Quest Builders is colourful and bursting with personality. I’ve always been fond of the Dragon Quest artstyle even as an outsider to the core series, and I found the mesh with retro voxels looked and worked well overall. It’s definitely not for everyone given many of the monster and NPC designs tend to go for the ‘cute’ factor more than cool, but there’s no denying its charm. The cracks began to show about ten hours into my playthrough for this review, though in the grand scheme of things they are minor complaints which may not apply to every gamer. Inventory management is slightly more cumbersome compared to DQB’s contemporaries – for a game which requires the player to spend much of their time in menus, it is puzzling the developers didn’t make this aspect a little more slick. I also was irked that at the start of each chapter, your level, materials and work are essentially removed and you basically start again with a clean-slate; I felt robbed of the hours I poured into my virtual buildings. The soundtrack, too, was grating, with unmemorable JRPG tunes causing me to turn the volume down constantly.

Perhaps the only big complaint I have which, objectively brings the overall package down, is the lack of a multiplayer mode. The likes of Minecraft and Terarria have shown players the fun and value in enabling multiplayer in sandbox-crafting games. Building things (and ruining them) is a lot more fun with friends, and while I understood before I played that Dragon Quest has always been traditionally a single-player experience, this type of spin-off warranted multiplayer. Dragon Quest Builders combines the sandbox-crafting elements of Minecraft with the classic Japanese role-playing game systems of long-running series Dragon Quest, resulting in a fun video game spin-off that works. Aside from sometimes repetitive combat and personal preferences on its level of linearity, DQB is a game worth checking out for crafting-simulation lovers and fans of the classic JRPG franchise open to a new direction, but the lack of multiplayer is an omission which can’t be ignored when considering a purchase.