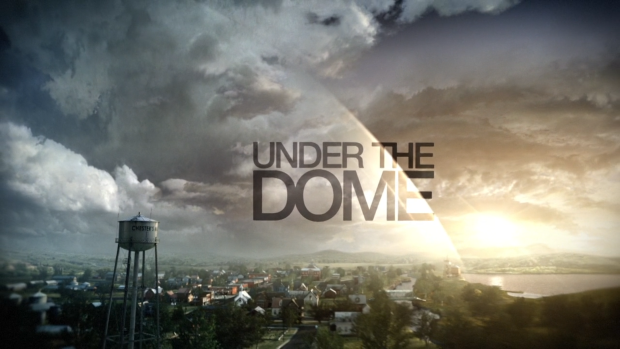 Under the Dome – Season One Blu-ray review

Summary: The production values are top notch and on occasion the show hits moments of greatness but all too often these lofty peaks are few and far between.

Chester’s Mill is your archetypical small American town, home to a motley crew of residents typical to Stephen King’s body of work who’re forced to come together under time of duress as they find themselves shut off from society by an impenetrable, semi-permeable dome of unknown origin. Adapted from King’s well received 2009 novel of the same name and with Steven Spielberg on board as executive producer, expectations were high for this series and thankfully were met for the most part after the pilot aired. Sure, some characters were inexplicably changed from their incarnation in the novel but the basic premise remained the same – A microcosm of society forming beneath the dome before finally, inevitably, turning against itself due to power plays by some of the town’s more opportunistic residents.

Unfortunately as the series progressed it started to deviate more and more from the book, almost to the point where, besides sharing the central conceit of the dome and a few character names, the series was almost unrecognisable from its source material. This isn’t always a bad thing, as The Walking Dead split off from the trajectory of the comic storyline quite early on and has, arguably, proved all the more successful for it; on the other side of the coin, however, sometimes telling a completely different story using familiar and well known (To fans, at least) character only serves to alienate the built-in fan base of the inspiration, raising the ire of some very vocal fans. The title of the show basically sums up the central premise, that of the town being caught beneath the dome, but, much like in the book, the dome soon becomes ancillary to the actions of the people trapped within. King has always had a fascination with the manipulative nature of small town politics and the use of tragic circumstance to control the population and Under the Dome features one of his most opportunistic characters to date, “Big” Jim Rennie. Played with delicious relish by Breaking Bad’s Dean Norris, Used Car Salesman Big Jim occasionally borders on becoming a villainous caricature but remains grounded for the most part due to Norris’s performance which, whilst not quite reaching the heights of Hank Schrader, is competently handled throughout. There are others as well: The crack fiend Reverend Coggins, Angie’s brother Joe, who finds himself living alone under the dome due to his parents being out of town at the time of the event and his sister being imprisoned by Junior, Lesbian couple Carolyn and Alice, travelling through town at the wrong time only to find themselves and their daughter Norrie held captive by the transparent barrier, plus a whole heap of stuff about prescient seizures, Mini-Domes housing mysterious eggs with shooting pink stars upon their surface and the efforts of the town as the attempt to come to terms with being isolated from the rest of the world as well as contending with dwindling resources and less than savoury residents. For the most part Under the Dome looks absolutely gorgeous on Blu-ray, particularly during outdoor daylight scenes, with natural and realistic colours and accurate representation of fine detail. There is some evidence of heavy noise during certain darker scenes and I also noticed some banding here and there but for the most part the transfer is fairly competent, albeit not without its flaws. Sound is presented by DTS-HD 5.1 Master Audio track that’s mastered fairly well, with the only real issue being one of sound synchronisation; at times the dialogue would pop out of sync by a fraction of a second or so, barely enough to be noticeable but absolutely maddening once you do. The directionality of the speakers is clearly delineated and satisfyingly robust, presenting suspenseful music cues (Of which there are many) with adequate force and dialogue is handled just as effectively. Under the Dome is a satisfactory release that could have taken out top marks if not for a rather pronounced sound issue. Under the Dome comes with a robust collection of extras spread out across its four discs. Most interesting are the featuretes, containing interviews with Brian K. Vaughan, Stephen King and other cast and crew members discussing the origins of the series and the process of translating, to some degree at least, what was on the page to the screen. There’s also a collection of written and filmed blogs by the character Joe, a gag reel and some short deleted scenes. Overall, a decent little collection of extras, offering insight behind the scenes that can often be lacking for a release such as this. The show never ramps up to reach its potential, leaving the whole affair feeling hindered, possibly by its network origins; whilst the book was rich in detail and admirably held together the myriad of plot threads that ran throughout, the series often fumbles the multiple character arcs and the additional plot elements are laughably out of place in the context of the original story. But this is all coming from a fan of the novel: if you’ve not read King’s novel then many of the issues people have with the show may be easily overlooked, as the wildly different interpretations of character motivation and behaviours seem to be particularly jarring for fans.

Under the Dome starts out pretty strong and the central premise in an intriguing one, but unfortunately by mid-way through the season you start to see the carrot that’s being dangled in front of you and realise that genuine answers to the main mystery of the show won’t be forthcoming, at least with this season, as the show becomes an almost soap-operatic “Danger-of-the-Week” series. Some of the performances can really grate as well, particularly Colin Ford as young Joe McAlister; the antithesis of authenticity, Ford’s portrayal of the bewildered and love-struck Joe is Disney movie quality at best. Simply put, Under the Dome lacks the confidence necessary to stand out from the crowd  and is too content to meander around with the main draw of the series becoming secondary to the cast as a result; this wouldn’t be an issue if the actions of the townsfolk were as interesting as the enigma of the dome but, for the most part, the writers have failed to create any real connection with the people of Chester’s Mill. The production values are top notch and on occasion the show hits moments of greatness but all too often these lofty peaks are few and far between. Still, I hold out hope that season 2 picks up the ball somewhat, as there’s definite potential for a great show trapped somewhere beneath the dome.