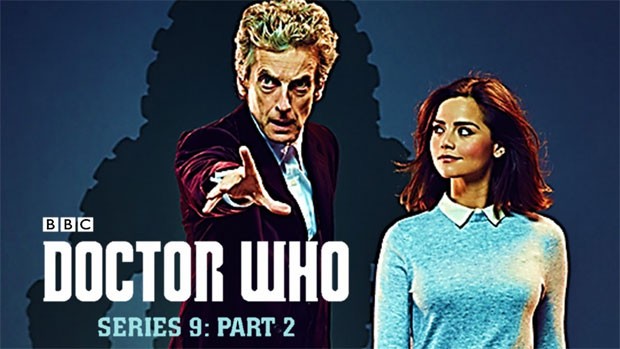 Summary: Series 9 picks up in its final episodes, but is it enough to overcome a disappointing beginning?

After the stumbling start to Series 9, Doctor Who in 2015 had to work hard in the back half to retrieve a relatively parlous situation. With viewing numbers on the decline, rumblings about Moffat’s approach getting ever louder, and talk that Capaldi wasn’t the right fit for an audience that was trending younger, the series was under threat as never before.

The series continues with The Zygon Invasion/The Zygon Inversion. Part one is written by Peter Harness (sadly responsible for 2014s Kill the Moon giant-chicken-hatching-from-the-Moon-farrago-of-nonsense) while Moffat co-writes the second part. This pairing saw the return of the classic series shape shifting alien race, the Zygons, last seen in the 50th anniversary story The Day of the Doctor. The Zygons present an excellent opportunity for conspiracy tales as trusted individuals inevitably revealed as sucker covered monsters. Doctor Who does this sort of tale admirably – Spearhead from Space is an example par excellence of early 70s paranoia in the same vein as The Invasion of the Body Snatchers.

After The Day of the Doctor, the Zygons who remained have assimilated into Earth society in human form. But when a Zygon faction emerges wanting to embrace their true identity regardless of humanity’s reaction, a chain reaction is set in place that may result in war. Unusually for a Moffat era, where the stories generally steer clear of anything remotely political, the Zygon Invasion/Inversion leans very, very heavily on the immigration issue currently convulsing the European Union and the threat of ISIS. Clara’s Zygon duplicate shooting down a jet airliner the Doctor is on, the same weekend a Russian passenger jet was shot down over the Sinai, is either very prescient, or another example of near the knuckle storytelling that may or may not be problematic to the viewer.

The next story is Sleep No More, by new series’ stalwart Mark Gatiss. Gatiss is a conundrum. A long standing Doctor Who fan (he had a number of highly regarded authorised Doctor Who tie-in novels published in the 1990s) with a fertile imagination, he has however turned in scripts that have largely fallen flat. Apart from The Unquiet Dead and The Crimson Horror, Gatiss’s scripts have been marked by an inability to speak to a wider audience outside the classic series’ fan boys from which he once harked. That said, Sleep No More is a bit of a triumph. Taking on the found footage genre dominant in horror movies today, Gatiss has crafted a tightly told, tense chiller that for once sees the Doctor fail to win. While the monster concept is a bit silly, the effects are well realised, as are the sets. While not a true found footage experience, the experiment is well worth the effort. Reece Shearsmith (The League of Gentlemen, Psychoville)as Rassmussen is great as the slightly creepy in the beginning, then very creepy survivor of something very badly wrong on the station. And the last scene may very well be the best thing the new series of Doctor Who has ever done.

Following this we have Face the Raven, written by Sarah Dollard. Heavily inspired by the Harry Potter books (in terms of setting), this neat, claustrophobic story neatly hoists Clara on her own petard. One of the themes of the last two Capaldi series is Clara’s arrogant belief that she’s as smart and clever as the Doctor. A contrivance of Moffat’s this notion is either inspired storytelling, or indicates his boredom with telling stories about the character whose name appears in the show’s title. Regardless, while Clara appears to be dead, as we know with Moffat, appearances are frequently deceiving (and disappointing as we’ll shortly cover) and were dealt with in the very next episode. Steven Moffat, as the British might say, is like Marmite. You either love what he’s done with Doctor Who, or you ragefully hate every last single wound he’s inflicted on the show. Either you love the fairy tale nonsense he’s imposed, or you loathe the destruction of established continuity or the way he’s cavalierly tossed fifty years of history into the bin. If you loved the Master becoming Missy, welcome to the former camp. If it made you want to tear your hair out while leaping off a very tall building, welcome to my world.

Regardless of which camp you currently find yourself in, Moffat, on his good days, is a very, very good writer. His history of sharply drawn characters, and witty dialogue over almost thirty years of television writing is testament to that. Whether such an approach is the right fit for Doctor Who is something the viewer needs to make for themselves, but when he does hit the mark, you’re left feeling like you’ve gone to heaven and come back to tell the tale.

Heaven Sent is the one of the handful of genuinely great episodes of Doctor Who. Essentially a one hander, with Capaldi front and centre, Heaven Sent is a magnificent examination of guilt and obsession. It’s not really Doctor Who, but when the central performance is as awesome as this, where the concept is so mind curdlingly insane it’ll leave you gibbering in the corner, who cares? Likely to win awards, Heaven Sent has enormous re-watchability.

What won’t win awards and should never been seen again is the follow-up, and season finale, Hell Bent. If Heaven Sent is Moffat at his best, this steaming turd of an episode is Moffat at his saccharine, maudlin, indulgent worse.

After the horrors of Heaven Sent, the Doctor has punched his way through a diamond mountain (yes, I did just write that) and made it to Gallifrey. The reason for why he was trapped punching a mountain is revealed – Rassilon, resurrected and returned to the Presidency of Gallifrey, put him there in an effort to reveal who the long prophesied Hybrid, supposedly destined to conquer Gallifrey, is. From about here the story begins to fall apart, and we’re soon freewheeling into an abyss of self-indulgent gibberish.

The less said about this episode the better. It looks great, as director Ravel Talalaly (Tank Girl), does her best to revive a dead on arrival script. Clara comes back to life, thereby compounding the original error in 2014 in the production team allowing Coleman to come back to the role. Moffat shrinks from depicting dead characters, yet makes it worse by giving Clara a ghastly half-life where she has to choose to die, and not let nature take its course. And the ending he gives Clara, of the Doctor gifting her a TARDIS so she can travel with the ageless Ashildir (Maisie Williams) simply debauches the very beginnings of Doctor Who.

So what to make of this last half of series 9? A definite improvement on the slush served up in the first half. The falling ratings are problematic, and likely point to the increasingly insular storytelling Moffat has adopted turning off the broad mainstream audience in the UK the show desperately needs to justify its existence. With Moffat announcing his resignation (in a year’s time!) and Chris Chibnall (Broadchurch) being tapped for the showrunner’s role, it is all change on Doctor Who. Though please let Capaldi stay on for at least a fourth year. He’s a genius!

Visuals: the blu ray format works an absolute treat. From the vistas of Gallifrey, or the confines of the castle in Heaven Sent, every last detail is lovingly reaslised in the format. The downside is that Capaldi looks absolutely ancient in the extras provided.

Audio: Murray Gold has at last demonstrated restraint in his soundtrack compositions, stripping back his extravagent scores and working to counterpoint the drama, instead of overwhelming it. Like the visuals, the audio on this release is superb

Extras: aside from subtitles, the set comes with behind the scenes mini-episodes that interview Capaldi, Coleman and Moffat. There’s some interesting behind the scenes footage and commentary, but not exactly essential viewing.