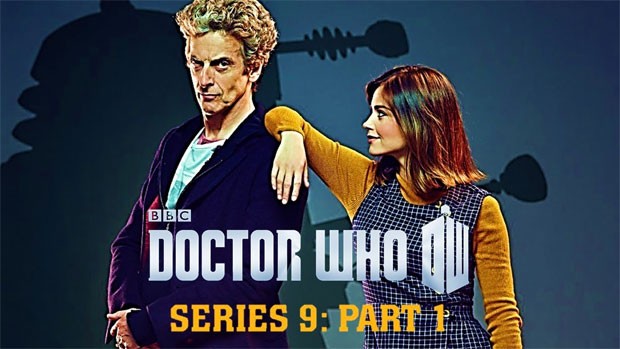 Summary: A step down from the heights of the acclaimed Series 8.

After the triumph of Peter Capaldi’s first series as Doctor Who in 2014, anticipation amongst fans for series 9 was high. While the last year’s two part finale was widely condemned for the casting of a female Master and the disrespectful handling of the Brigadier, not to mention the poor quality of the storyline, the middle part of that series was characterised by fine writing and a powerhouse performance by Capaldi who seemed to be channelling Jon Pertwee’s hair and the harder, alien quality of Tom Baker’s early years in the role. So what then should we make of this set of stories representing the first half of Capaldi’s sophomore effort?

In a word, disappointing. Incredibly, there is none of the fire, fun or general sense of adventure that marked series 8. Jenna Coleman (Clara Oswald), who reportedly quit late last year then changed her mind during the filming of series 8, is for the most part sidelined. She’s a fifth wheel trailing after Missy in the opening two-parter, almost entirely absent from episode 5, and playing a Zygon duplicate of herself for episodes 6 & 7 – a role that could’ve been assigned to any character in the story. This lack of a consistent dynamic between herself and Capaldi seriously undercuts the power the stories should exhibit. Couple this with an at times phoned in performance by Coleman and the series strikes the viewer as a damp squib.

The Master’s Apprentice / The Witch’s Familiar

Series 9 opens with a sequel and a prequel to the stunning 1975 story, Genesis of the Daleks. Even though the episode titles point to Clara being a central figure, she spends most of the story as a foil for Michelle Gomez’s cackling Missy. Gomez is apparently a fine actor, but like John Simm’s version of the Master, the characterisation and writing are terribly shallow, and reflect poorly on a creation that should be darkly charismatic, as seen with Roger Delgado’s performance in the 1970s.

Moffat opens the story channelling former showrunner Russell T Davies penchant for worldwide events in an effort to give the story global heft. It was never a good idea then, and now, given recent global events involving plane accidents, it’s a remarkable misstep.

The cold open for episode one is guaranteed to have hard-core fans open mouthed with shock; sadly, the rest of the running time is a bumbling affair that has a string of set pieces only tenuously connected that lead to the massive Davros/Doctor confrontation, which is the heart of the story. The lack of a compelling plot means that Missy and Clara are shoved aside in a way that indicates that Moffat’s decision to embrace a two-part format for most of series 9 isn’t backed up by good enough plotting or writing. It seems at this point he has no idea what to do with Clara and so buries her effectively beneath the Dalek city.

Under the Lake / After the Flood

Happily, things get back on track after the opening misfire. Writer Toby Whithouse (The Game) settles us back on ground familiar to all Doctor Who fans – the base under siege trope. When the Doctor and Clara arrive at an underwater base haunted by ghosts of the past and present, they find themselves separated as they desperately attempt to discover what is going on. There are some wonderful set pieces in this story, particularly in part 2 as the deaf commander of the base is stalked by an axe-wielding ghost. The depiction of how she ‘hears’ its approach echoes that seen in the Daredevil tv series and is a moment that sends a chill up the spine.

Much of the tension and claustrophobia dissipates when the action heads aboveground (and into the past) as the Doctor works to unravel the cause of the hauntings. An alien presence is detected, and after some merry japes and more of Moffat inspired timey-wimeyness (or hand waving, if I’m being harsh) see a more or less happy resolution.
The design work is very good – dark, tightly confined sets combine well with a memorable fleet of ghosts. With Capaldi at his best mining some very dark material, and with Coleman given more to do, this story is a vast improvement on the opening episodes. The Girl Who Died / The Woman Who Lived

One of this series’ running themes is the fate of Clara. With Coleman definitely leaving, the prospect of Clara’s death is in the offing. This is touched on again in episodes 5 & 6 as the Doctor and Clara find themselves first captured by Vikings, which brings them in touch with Maisie Williams (Game of Thrones) Ashildir. Her casting sent fandom into something of a lather as when announcing her, Moffat revealed that she was someone the Doctor had met before. Was she the Doctor’s granddaughter, Susan? Or perhaps Romana, a Time Lady and former companion?

Nothing as interesting as that, sadly. In a season unfortunately packed with obscure Doctor Who references (memo to Moffat – the general audience don’t care, and unless you actually bring back and original Doctor, neither do the fans) Williams turns out to be a simple villager who proves herself helpful when the village is attacked by aliens known as the Mire. The design work of their metal suits is visually impressive, but even more so is the rather horrifying faces hidden away.

Taking its inspiration from The Magnificent Seven, The Girl Who Died is a bit of a romp as the Doctor comes up with a Rube Goldberg inspired series of traps to defeat the aliens and carry the day. And again, the death that seems to be shadowing Clara is referenced, perhaps more heavily handed that needed. The use of arcs within the modern series of Doctor Who has never exhibited a light touch under either Davies or Moffat, and in this episode, the action stops for 2 minutes while the Doctor and Clara dance around the possibility of death.

Events take a turn for the worse for the viewer in the frankly uninspiring and hopelessly bland follow up, The Woman Who Lived. Granted immortality by the Doctor at the end of episode 5, Ashildir is forced to constantly reinvent herself as those around her age and die. Most of the blame for the faults in the story can be sheeted home to Williams, whose blandness makes a blank page a positive riot of colour and shape. The well-worn trope of the exhausted immortal is trotted out in this episode, one that takes its inspiration from highwaymen like the fabled Dick Turpin. With Clara not featuring in this episode, Capaldi is forced to make do with a depressed Ashildir, and it makes for a not very entertaining experience for the audience. The cinematography is fine, less so the bawdy humour exhibited by comedian Rufus Hound as highwayman Sam Swift. Moffat constantly bangs on that the Doctor Who is a children’s tv series – if so, less dick jokes would be appreciated.

Overall, these first set of episodes represent a step down from the drama and excitement of 2014. Capaldi’s interpretation has been lightened, which is likely a deliberate decision on Moffat’s part, as the Doctor becomes more comfortable in his skin. While Capaldi is easily the best actor to play the role in the modern version of the series, one fears that like Matt Smith, his era will be burdened by less than stellar storytelling and become very much a missed opportunity. Coleman is a disappointment, sadly, and has lingered in the role far too long. Under Moffat, she has become something of a peer to the Doctor, and no longer represents the audience identification character that she should be instead. Series 9 started hobbled by a badly plotted opening pair of episode, which were further undermined by the presence of Missy and from there has barely gotten out of a trot. One hopes that the second part escapes the shackles that have been imposed, but one isn’t overly hopeful. Visuals: the one shining light of this set are the beautiful visuals, which are captured in this blu-ray set. Everything is rendered very well, with the colour palette used reproduced in all its melancholy glory.

Audio: whoever mixes the music for the series does no justice to Murray Gold’s efforts, which the sound frequently swamping the dialogue. While Gold’s fondness for a choral arrangement is undiminished, it certainly serves to underscore the heightened emotions and character moments that are the Moffat era.

Included in the set is a mini-poster of Capaldi and Coleman nonsensically running hand in hand across and alien landscape. This is what Doctor Who has become – in the place of action and adventure, it’s all about the ‘feels’. Shudder.

There is also a pack of oversized collector cards featuring poorly reproduced images of the men who played the Master prior to the revival of the series in 2005.

On disc one there is a featurette interviewing the actors on the first day back filming the opening story. It’s interesting to see Moffat so hands on the set, offering advice to Michelle Gomez.

Of note for spoiler hounds out there is that the back of the box, where the usual copyright/trademark information is contained are mentions of K-9 and the Cybermen. A hint of things to come..?