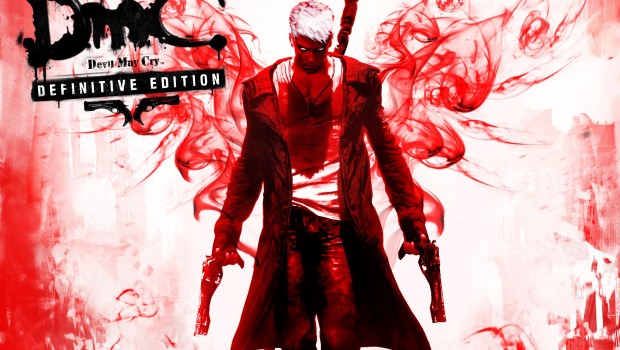 Summary: A fine example of a remaster done right , DmC is a fast paced action game that offers a wealth of customisation options to appease even the most ardent critic of the game.

When it was originally released in 2013 DmC: Devil May Cry raised the ire of many fans of Capcom’s long running series by taking a different tact and daring to reboot the franchise with a decidedly different take on the demon hunting protagonist Dante. Gone was the white haired and slightly effeminate (And, in my opinion, generically Japanese) incarnation from games past, replaced by an abrasive and brash version that had *Gasp* dark, short hair!

Seriously, the furore from vocal fans was a little over the top, with many boycotting the game based on the aesthetic appearance of the main character before the game had even hit the shelves. This backlash from fans meant that many overlooked what was a surprisingly solid and relatively faithful addition to the franchise from new developer Ninja Theory (Enslaved, Heavenly Sword); other complaints from fans who had actually bothered to give the game a chance was that the gameplay had been dumbed down in order to appeal to a more casual audience.

Whilst it’s true that the combat wasn’t as complex as in, say, Devil May Cry 3 or 4, it was certainly a step up from the first two entries in the series and, more to the point, the enjoyment factor of the game didn’t suffer one bit; in fact, I personally prefer the more streamlined approach of DmC’s hyperkinetic gun and swordplay, finding it much more comfortable to get to grips with and more intuitive overall. Despite its lacklustre reception, Capcom obviously had faith in the game and this has never been more evident with this remaster for current gen consoles. I had a quick look online at the change log for DmC: Devil May Cry Definitive Edition and it’s clear that they weren’t content to just slap a new coat of polish to the visuals, with an astounding 16 or so pages of additions and refinements, many of which have been explicitly designed with the intention of swaying the opinion of those who denounced the game the first time around.

First things first, though – The game’s story. Seemingly inspired by They Live, the cult classic John Carpenter film, DmC introduces us to a world where mankind is subliminally subjugated by demonic forces who use hidden messages, right wing partisan media like the Raptor news network (A clear allusion to Fox News) and energy drinks imbued with a rather disgusting secret ingredient in order to keep humanity docile. Unaware of the malevolent forces at work within the shadows, humanity carries on with their daily lives in blissful ignorance, presided over by the demon king Mundus who has adopted the form of a highly influential and successful banker. However, there are some who have been afforded a glimpse behind the curtain and are actively working against Mundus, labelled as terrorists in the media.

This is where Dante steps in, a half demon/half angel (Nephilim) badass with the ability to slip in between dimensions to Limbo, the corrupted underworld that lies beneath the veneer of the “real” world. Roped into joining the fight against Mundus by Kat, a young woman with the ability to astral project herself into Limbo, Dante soon discovers that the “terrorist” operation’s leader is actually his half-brother Vergil, who explains to Dante his true heritage and the importance of both of their lineage in the fight against Mundus. Traditionally Devil May Cry games have had convoluted and often nonsensical plots but DmC manages to spin an engaging yarn, albeit one that’s sometimes heavy handed in regards to the satire and social commentary. Still, I personally found it to be the most coherent plot across the series as a whole.

Gameplay leans heavily on frenetic combat, with Dante initially starting off with his twin pistols Ebony and Ivory and his sword before incrementally adding new weapons to his arsenal. Each has its pros and cons and you’ll soon be switching between them frequently in order to obtain that ever elusive SSS rank. The style system that’s integral to the series makes a return, rewarding players for inventive and unique ways of dispatching foes with anything from a D to the much coveted SSS ranking; fans who complained that the ranking system was too lenient in the previous incarnation of the game will be glad to hear that Ninja Theory has refined it to fall in line more with previous entries in the series. As you progress through the game you’ll unlock upgrades, building upon Dante’s already formidable skillset until you’re effortlessly bounding around leaving a trail of havoc in your wake. Aside from some fairly uninspired platforming sequences, the fluid combat forms the main crux of the gameplay, which, for DmC fans, is exactly what you’d expect.

The combat itself has been refined, with multiple options to appease those who denounced DmC for being too easy; there’s additional difficulty choices like Hardcore mode and Gods Must Die mode, as well as the inclusion of a turbo option that speeds up gameplay by 20%. There’s also the Must Style mode where players must attain an S ranking before enemies take any damage. The best thing is that players can stack up these gaming options, effectively tailoring their DmC experience to suit their individual desires… Hell, for the purists there’s even the option to play the entire game using a skin of Dante from the other games, all wispy white hair and billowing red leather jacket. Timing has also been tweaked, such as the window for effective combos, and there’s also a new lock on system that harkens back to the classic games. Basically, Capcom and Ninja Theory actually listened attentively to the complaints from fans and made a concerted effort to implement any and all changes that could be beneficial to the game, making this a rare title that actually lives up to title of Definitive Edition.

There’s also DLC included, such as Vergil’s Downfall, a six episode coda to the main story, as well as not only the original Bloody Palace mode but also a brand new one for Vergil, although this only contains 60 levels rather than the usual 100. The linearity of the game may deter some players, as it’s essentially structured as follows: Progress through a small platforming area, enter a large arena, fight countless enemies then rinse and repeat until the inevitable boss battle. However, this isn’t really detrimental at all, as the inventive game setting, particularly some of the boss battles, and wide variety of enemies requiring different tactics to bring down more than make up for any inability to deviate from the main quest.

The boss fights are quite inspired, seeing you fighting a disembodied head inside an actual news channel broadcast, traversing the neon pathways of a hellish nightclub in a kind of twisted variation on reality talent shows and effectively attempting to abort a sentient demonic foetus that gestates its own mother. The highlights come thick and fast and really make for an entertainingly visceral experience that is entirely undeserving of the scorn it received when initially released. Although the visuals appear relatively the same they’re now presented in 1080p resolution and 60fps, making the entire experience a smooth and fluid affair. The enemy and environmental designs look visually stunning, especially the Limbo levels with their shimmering quality and corrupted variations on the real world.

The soundtrack features music from Combichrist and Noisia and leans rather heavily towards the metal and dubstep end of the spectrum, which isn’t a bad thing in my books. The pulse pumping tunes really serve to immerse the player in the game and the ambient sounds and that of the combat are also quite accomplished.

If you missed out on the game the first time around then DmC: Devil May Cry Definitive Edition should definitely be given your consideration, especially considering the low price point. A fine example of a remaster done right (Although one must ask: “Where the hell are all the true current gen titles?”), DmC is a fast paced action game that offers a wealth of customisation option to appease even the most ardent critic of the game.

Offering the best of both worlds for fans both old and new, hopefully this instalment (Along with the upcoming remaster of DMC4) will reinvigorate the franchise and finally get DmC: Devil May Cry the attention it deserves.