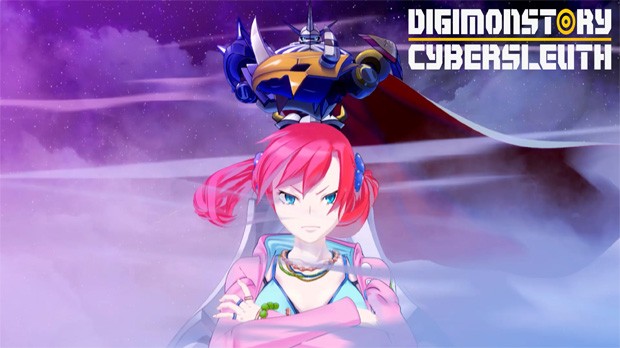 Digimon Story: Cyber Sleuth is a PlayStation 4 and PlayStation Vita role-playing video game based on the popular Japanese anime television show series. After a substantial petition to see the game localised in English, its Western release has revealed an intriguing RPG with the aesthetic feel of Persona, the turn-based combat mechanics of Shin Megami Tensei, a dash of Pokemon’s monster battling and stats-raising and its own unique take on hacking, digital worlds and monsters and cyber crime. The main thing buyers interested in the premise need to know is it inexplicitly old-school when it comes to turn-based grinding, random encounters and linear dungeon design. This is classic JRPG flavour in gameplay mechanics, and it may be perfect or outdated depending on how spoiled you have become from more recent games in the same genre.

Cyber Sleuth’s story puts players in the role of a male or female character who is an amateur hacker in a technologically advanced alternate version of Tokyo. Citizens of Japan and around the world regularly use EDEN, a virtual reality network within the Internet that allows people to physically enter and use it for their day-to-day activities – social gatherings, work functions and entertainment. It’s an interesting premise which draws parallels to our modern-day obsession with technology and the many unique dangers we fail to see arise from it. The danger in Cyber Sleuth is when the protagonist and his friends entangle themselves in the seedy depths of the interconnected digital world. A mysterious stranger tells them of a device called Digimon Capture, which allows them to capture Digimon, literally digital monsters who roam Cyberspace EDEN like viruses, but are mostly hand-waved as fake. After seeing for themselves that Digimon actually exist, the group is attacked by an Eater, a data-based being which inflicts them with a digital virus; it has also spread to other users of Eden. Soon your character becomes an official “Cyber Sleuth” for Kurumi Detective Agency, to try and discover the cause of the virus. For a casual fan of the series as a child 15 years ago, I was surprised to find a very high-stakes, serious plot on cyber hacking and the dangers of the digital world, even if the characters often got goofy to lighten things up. Animations and interactions between NPCs were frequently entertaining and well-acted, even though I was relying on the subtitles to understand – that’s right, there’s no English dub for Cyber Sleuth, which may be a deal-breaker for some but most likely will sit fine with the majority of Digimon fans. The localisation team’s writing efforts, however, sometimes felt a bit iffy, with unrelated dialogue often popping up unceremoniously in both main and side-quests that just confused me. When you’re in control of your character, you’ll be exploring various areas of Eden from a  third-person perspective, talking to NPCs, finding items scattered around areas and taking on side-quests in addition to the main case, most of which usually involve horrible fetch quests (which you should avoid) and the much more exciting Digimon battles. Turn-based combat and monster battling and training is what makes up the bulk of gameplay in Cyber Sleuth; players have plenty to do, including building up your Digimon roster (over 200+ fully modelled Digimon in the game), digivolving them to better versions, and working out which have the best stat growths, standard attacks and special abilities like debuffs, buffs, heals and power attacks to overcome every single enemy. It’s all very addictive and time-consuming – so be prepared to put aside more than a few hours. Random encounters does feel a bit too old-school for me compared to having visible enemies in the dungeon maps, but it may resonate better with fans who just want a “pure” JRPG combat experience. In every fight, your party abides by an organised line-up side-bar which lets you know who is next to perform their action, adding another strategic layer to the typical JRPG combat formula. An elemental-based rock-paper-scissors mechanic also keeps you on your toes as you need to make sure specific weaknesses in your party and your enemy are accounted for; it’s just a shame the A.I. sometimes feel a bit dumb, often making suicidal or time-wasting moves in critical moments which kill the immersion somewhat when you’re winning a hard-earned fight.

Graphically, Digimon Story: Cyber Sleuth is a looker. The handheld roots on the Vita do sometimes show when playing the PS4 version with a few blurry textures in the environment popping up every now and then, but the colourful anime art style and clean look of all the characters and Digimon monsters is superb. Battle animations and flashy attacks of your fellow monsters also keeps things fun to watch during combat. The soundtrack is a pleasing set of pulsating electronic beats and catchy battle tunes evoking the feel of an unknown digital world, though it can get a bit grinding on the ears if you’ve been grinding away to level up your party for hours. Digimon Story: Cyber Sleuth is a fun JRPG with decidedly old-school monster battling and turn-based combat mechanics with a creative and unique narrative take on the digital future and dangers of hacking. Gameplay may be too linear and grindy for some, but if you’re a fan of similar franchises like Pokemon, Persona, Shin Megami Tensei and other dungeon-crawling RPGs, give Cyber Sleuth an honest go – it’ll be nice to see another Digimon title localised again!