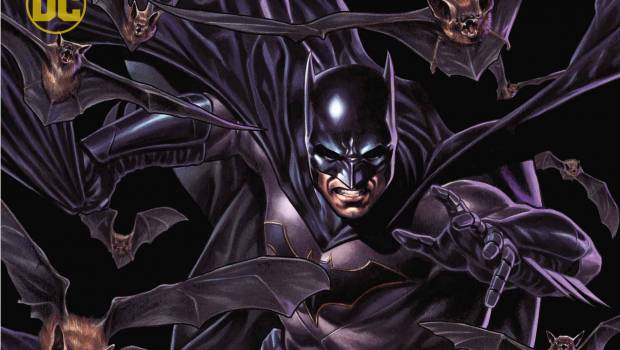 Summary: Batman continues to deal with the masked villain Karma

Before I get into the review of Detective Comics #985, I just have to say that THIS is what a Batman comic should be. I’m sorry Tom King, but it is time get out some paper and take some notes. Bryan Hill is taking your weak story writing to school and giving the fans what they really deserve! This issue was absolutely incredible and has been the best issue from Hill so far. If you have missed seeing the Caped Crusader then this story arc is what you need. Though the story isn’t ground breaking by any means, Bryan Hill delivers it in a way that just feels right and feels good to read. The story starts with Bruce Wayne brooding in his Batcave, like Bruce Wayne should. While conversing with Alfred, Bruce informs him that he knows that the dagger left for Bruce is a message meant only for him. In the previous issue, Karma referred to Bruce by his name, indicating to Bruce that he must know who this person is. So to jog his memory, he takes out one of his regular cars for an adrenaline inducing ride to jog his memory. During this ride, Bruce finally puts the pieces together about the identity of Karma and that it was Batman that created him. Like I said, not entirely groundbreaking but, man, this story is a ride. From here, the story jumps to Pierce Jefferson keeping the Bat-Brats safe in one of Bruce’s penthouses. Hill hits the nail on the head with how these kids totally disregard everything that Batman tells them to do and even admits to Jefferson that “He wants you to ignore the rules.” This page really shows why I detest the younger members of the Bat-Family. It also reminds me that I miss the old Oracle Barbara Gordon. This new millennial Barbra just isn’t doing it for me. The one thing I did enjoy about this part was Jefferson picking each one of them apart. I rather enjoyed the truth bombs he dropped on those kids. However, it is short lived and I feel like they are going to get Jefferson to break, but I take what I can get when I can get it. There is so much I can say about the next few acts of this comic but honestly they are just too amazing and I wouldn’t dare take anything away from the reader. It was just so incredible and really made me love this issue and what Bryan Hill is doing this his time on Detective Comics. It was just beautifully orchestrated and left me in awe with its ending. This would have easily been a 5 star issue from me, but I feel like the art team really just didn’t serve it justice. I mean Bruce’s face changes in this issue more times than the Alien Bounty Hunter in the early seasons of the X-Files. It was so inconsistent with a mix of some good and some lackluster work. So for that, I’ll give this issue 4.5 stars as the writing in this issue was the true shining star. It is nice to feel excited about a Batman driven story again.