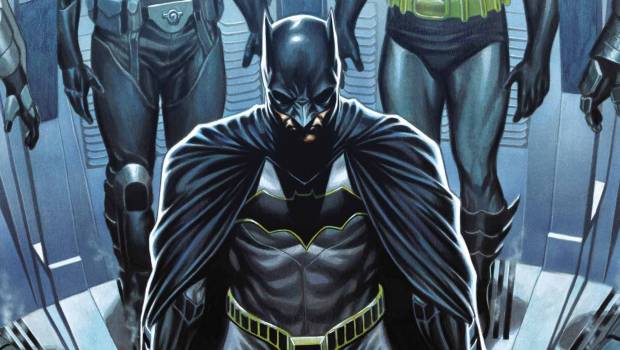 Summary: A nameless villain wants to prove to Batman that his Bat Family makes him weak.

Now I will not lie to you, while this is a Detective Comics review, I have NOT been a fan of the series for some time. A few of those reasons being I’m really not a fan of a lot of members of the Bat Family, I personally think it has gotten too big and, honestly, some of the members have no business being in the family. I won’t get into all of that as I can go on and on about my disdain for them, but the other reason I hadn’t really been a fan of it is because of the previous writer of the series, James Tynion IV. I just wasn’t a fan of the direction he had taken the series and I don’t think I was alone. So when DC Comics announced new writers of Detective Comics I got excited, then when I found it Bryan Hill would be doing a story arc I was on board. The story starts with a young teen on the news talking about his ViewTube channel that is dedicated to his fandom to the Dark Knight himself. First, I would like to point out how reckless this kid parents are; I mean this is Gotham City. They are letting their teenager, in Gotham, on a huge social media site,talk about his love for Batman… You might as well hand him right over to ANY of the copious amounts of villains that run amuck in Gotham because NO ONE would ever think one of these villains would use this kid against Batman or any member of the Bat Family. No that would NEVER happen, BUT OH WAIT, yeah it so does. One week later, this kid has been captured and tied to a chair as bait set out for one of the members of the Bat Family. Then here comes good ol Duke Thomas to the rescue; however, this all turns out to be a ruse. A bomb goes off, killing the young teen and seriously injuring Duke. Our nameless villain in this story arc wants to prove to Batman that his Bat Family is holding him back so he intends on taking them out to prove this point. In the meantime, Batman sets out to find Jefferson Pierce or better known as Black Lighting. Bruce wants him to teach and lead his young group of members. I love this because Black Lighting is pretty amazing. We get to see Black Lighting totally handle a situation with a mad man, though he didn’t really like the outcome, I thought it was totally amazing. Once Pierce gets home, he is confronted by the Batman where he tells Pierce that he needs him in Gotham City. Upon returning to Gotham City Batman receives a message from our nameless villain. This is where you pretty much get the rundown that he wants to remove the Bat Family from the picture because they hold Batman back. Sadly, I can’t say I disagree with him, however I’m calling it now that this story concludes with the Bat Family coming together stronger than before, proving our villain wrong. The story has been good so far but you can kind of see where this is headed. The story concludes with Cass in Gotham talking to Alfred on the phone and requesting to see Duke; however, this conversation is cut short when she is attacked and held at gunpoint by our nameless killer. This issue really impressed me and honestly makes me look forward to another Detective Comics issue which is words I haven’t said in a long while. Bryan Hill is a good writer and it shows in this issue, though sadly this seems only to be a filler arc before another writer takes over. Don’t let that deter you from this story arc because honestly it’s starting really good. Not only was it a good read but honestly beautiful to look at as well. The art team of Miguel Mendonca, Diana Egea and Adriano Lucas really blew this issue away with their work. I’m giving this one 4.5 stars and look forward tothe next.