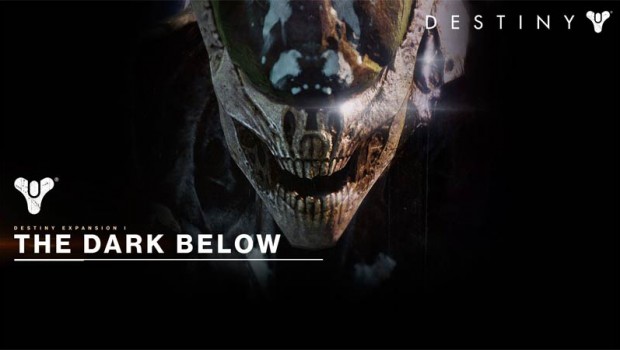 Destiny The Dark Below PS4 Review

“Beneath the surface of the Moon, a long-forgotten enemy wakes. Survive the Hellmouth, and stop a dark army from invading Earth”

Welcome to the latest and partial exclusive (for now) DLC expansion pack for Destiny on the PlayStation 4 that sees the Guardians take on a new enemy who have been residing under the surface of the moon. Unfortunately for the Humans, Awoken and Exo, this enemy has been awakened and it’s up to the Guardians to stop this threat before this ancient evil invades Earth and potentially spread its curse to other areas of the galaxy as the god Crota returns. Apart from adding new areas, enemies, weapons and armour to the franchise, Bungie are definitely in the world building phase at the moment as they flesh out this new first person shooter MMO with a touch of role-playing thrown into the mix. The PlayStation 4 version also comes with a new exclusive weapon, The 4th Horseman which does kick some serious ass. There’s also some other bonuses for PS4 owners as well!

But the question that most gamers are probably asking is how does this DLC expansion pack stack up to the original game which was released in September 2014. This question is dependent on a couple of factors but if you’re a fan of the main game, than The Dark Below definitely enhances your Destiny experience but it also comes at a huge cost to those who have levelled up their gear which I’ll get to later. However if you found the previous game a little lackluster than the expansion pack may not be for you.

The story of The Dark Below is interesting, however that huge sci-fi blockbuster atmosphere is missing in this expansion as the DLC is progressed through voice acting which definitely minimises the threat of this evil army and “god” under Earth’s moon. Peter Dinklage’s Ghost is also absent in the DLC which is a shame and although this character started to annoy me in the original game, I actually miss some of those one-liners. Furthermore this DLC offers 3 new story missions which once again expand the Destiny universe. Although the gaming mechanics remain the same in Destiny the Dark Below, Bungie have incorporated some new areas that are quite different from the original and as a result, it has this real claustrophobic feel to it with an element of the unknown. It really puts on you edge and sure, there’s only two areas which were in the original game but they both feel quite different and more expanded. The story also adds a new vendor in the Tower called Eris Morn (who also serves as a plot point) and players are still hunting the powerful and elusive Hive Witch Omnigul which does create a sense of continuity with the missions giving the player something more challenging, especially if you’ve been playing Destiny since its launch. Lastly, there are three new maps for the Crucible that include Cauldron, Pantheon and Skyshock.

These new maps are slightly different when compared to each other with the Cauldron transporting the players to a Hive dungeon that has this real Aliens feel to it and is ideal for players who like to fight mano-o-mano. However my favourite map is Skyshock which gives players access to vehicles and the new the EV-30 Tumbler Sparrow that is faster and more durable than previous Sparrows. This map also has a great sense of openness to it and requires the players to change their tactics opposed to something like the Pantheon which is ideal for snipers and camping. PvP is still thoroughly entertaining in The Dark Below and it’s good to see Destiny fans jumping onto the new expansion pack with these new areas. Another new thing that Bungie have changed which have infuriated some fans is that much of the old weapons and armour is obsolete in The Dark Below but there’s quite a lot of new gear, especially legendary and exotic gear that is found in the Tower and Crucible vendors provided you have collected the material. So yes, if you spent hours upon hours levelling up your gear in the original, you’ll be quite disappointed In the Dark Beyond and it’s also a little tougher to get the gear as the looting has changed with additional materials required to upgrade. In other words, it’s more sparse. With that said, Destiny the Dark Below still requires grinding, however the combat mechanics are pretty much flawless. I also love the inclusion of the new weapon called the Murmur which is a powerful fusion rifle and definitely give you some additional bonuses when fighting both the AI and human players. There is a new level cap of 32 (provided you have the right gear) and considering that Bungie have stated that this game will have a 10-year lifespan, it’s going to be quite interesting to see where this franchise heads. However with the inclusion of a new level cap, legendary weapons, it’s really easy to be drawn back into the Destiny universe as you commence that grind “again” for the ultimate power. It’s just a shame that Bungie have thrown the baby out with the bathwater so hopefully Bungie will take note of the feedback from this DLC!

I love the new weapons, gear and areas in Destiny the Dark Below but was not a big fan of starting that grind again in terms of my gear… but damn, they’ve got me hooked again!