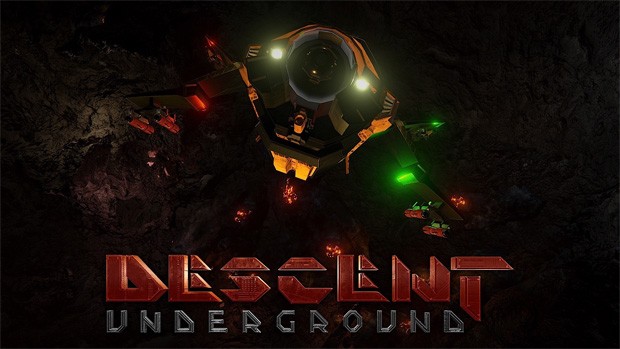 Summary: When old gaming is brought back to life and given an update in the right way!

There are certain games that hold a strong sense of nostalgia, for me games like Wolfenstein, which I remember seeing demoed in a computer shop whilst out walking when visiting my grandparents house one time. Hexen and Heretic also hold a special place as they were games that we used to play at school in the IT classroom in Lan battles.

Descent sits alongside Hexen and Heretic. Before “everyone” was online and able to play multiplayer with someone halfway around the world, we had to either utilize rooms that were built as Local Area Networks or for the really dedicate you could take your whole computer (not laptop… desktop) to a hall or someones house and connect to others to play multiplayer… baring in mind this was also when most people were using giant, heavy CRT monitors too). This is basically my very long winded way of saying that Descent has kept that little space in my heart reserved for fond memories… ones that you generally think will simply stay as part of your history… well Descendent Studios must have had similar experiences as they have taken the old defibrillator panels to the apparent corpse of Descent and zapped new life into it.

The first thing I noticed is that it’s very pretty… especially when you get into some combat, the explosions are gorgeous! I do need to note that this is still early access so they are still building it (as such I haven’t been able to play the single player campaign yet)… They have also added VR support though I suspect they may be using the 0.6SDK as I’m running 0.8 on Windows 10 64bit and haven’t had any luck with it recognising my DK2 headset. I can say that it is very quick and easy to drop into a bit of multiplayer either with the bots or with other players. There are a handful of maps to play on and you get the smart option of just touring around them before worrying about dodging rockets and lasers. For anyone who has never played a Descent game before the first thing you need to get your head around is that you aren’t just going to be traveling forward backwards and side to side… you will also be moving up and down so it’s a good idea to get a feel for the different craft you can chose from (each having a special “weapon” to make it stand out from the pack), practice your roles so you can maneuver with greater ease.

The developers are looking at building a familiar yet enhanced single player campaign… there really was nothing like dropping down into a new cavern only to find a rogue mining droid sitting there waiting to break you open, forcing you to engage evasive maneuvers and fire a volley of rockets and lasers to hopefully send him exploding into oblivion before he can take you apart. As an added bit of flair they are also looking at adding customization so you can have your own unique drone If you have those touches of nostalgia this will see you scratching that itch with a modern visual flair and some new gameplay mechanics to avoid you feeling like it’s simply a fresh coat of paint. The inclusion of VR is also excellent as anyone who has had the fun of playing around with an Oculus or possibly even a HTC Vive knows that it really can add a completely new depth and certain immersion to gaming… the thought of dropping down into a new cavern that you are admiring and suddenly seeing a mining drone out of your peripheral vision only to swing your head around to see just what danger lies ahead of you… sign me up!

Well done development team I look forward to many more hours piloting through the caverns and hopefully sucking less at multiplayer ;)