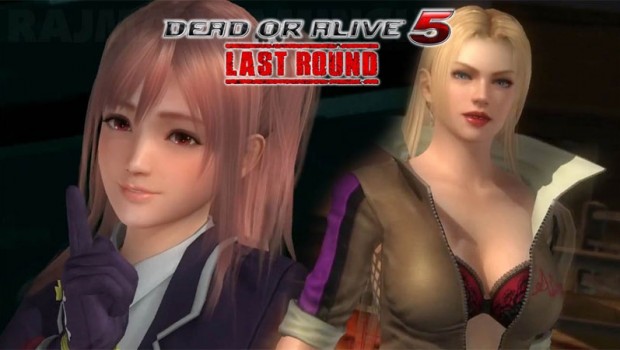 Summary: Dead or Alive Last Round is still a great fighter but is slowly starting to show its age, even with the overtly sexualised anime inspired characters

The definitive Dead or Alive 5 experience is now available on the PlayStation 4 (Reviewed) and the Xbox One as this action packed fighter with a touch of the titillation factor is finally on next-gen consoles! Although if you already own Dead or Alive 5 Ultimate on either the PS3 and the Xbox 360, then there’s probably very little reason to upgrade to the next-console version unless you’re a true purist. The biggest difference between this version and the previous incarnations is that the graphics boast a high definition render and runs at a very smooth 60 frames per seconds. Last round also includes 5 new characters, 2 new stages, 33 new costumes (some being quite sexy) plus a plethora of character customisation options that include new hairstyles, accessories, even underwear and there’s plenty to be found in this 3D fighter. That’s definitely a packed roster so you can rest assured that your favourite is included and it definitely increases the longevity of this title as you attempt to master the characters at your disposal. Needless to say that when added with the unlockable costumes, there’s heaps of little bonuses to found in Last Round, especially with the inclusion of the boss from the original Dead or Alive game Raidou and a very clever fighter called Honoka, a female school girl who can mimic other fighters manoeuvres. In terms of combat mechanics, the game is just as good as the previous version of this franchise, Dead or Alive 5 Ultimate that gives the player a very honest and sturdy fighter. Sure it doesn’t reinvent the wheel but works quite well. Controls can be mapped in a variety of ways on the DualShock Controller and overall the gaming mechanics feel right as you attempts holds, kicks and punches in order to win victory over your opponent. Like with most modern fighters, you can get away playing the game as a button masher on the lower difficulty level, however as you increase the difficulty, you do need to adopt strategies that are generally a combination of attacks and holds. In terms of gameplay modes, there is a story mode that is a little over the top and at times hard to follow about the DOATEC Tournament run by Helena who is trying to put a positive spin on her empire which her father almost destroyed plus the standard score attacks and survival modes. Last Round can also be played locally or multiplayer online and I found that the AI components, depending on your difficulty level can really give you a challenge. Real players however give the more advanced players a true challenge, especially when you engage in ranked matches. My only drawback with the gameplay is that it is starting to show its age a little in terms of controls and manoeuvres that your characters can do. Needless to say, the fundamentals are still there but for someone familiar with the entire series, I was hoping for something a little more industrious. Graphically, Last Round looks almost identical to the previous generation, however with the inclusion of the high definition render and high speed processing, it makes the characters look more detailed and move with a silky grace. The female characters are still the highlight of this series and once again all these characters are oozing with sex appeal, not to mention an algorithm to move their breasts and the inclusion of sweat dripping down their bodies or even their clothes becoming see-through. It’s pure fan service at its best and all the characters have this anime inspired appearance to them. Backgrounds are quite decent, although a little Spartan and overall, the series is definitely starting to show its age. In terms of music, Last Round has this real K-Pop feel to it and some very over the top voice acting. Sound effects work well with all the kicks, punches and smashes. The female characters also huff and pant which once again pays the fan service, even though it is over the top! Even though feminist may cringe at the Dead or Alive franchise, the overtly sexualised content is also what made this franchise so popular and giving up on this would just turn the game into another bland fighter. Given that, most of the female characters are quite powerful characters, although some have one too many clichés.

In the end, the gameplay is very sturdy, albeit a little dated but with the inclusion of new characters like Honoka who is quite a clever fighter, it really adds to the overall experience of this decent fighter. Recommended to those who love a good fighter!