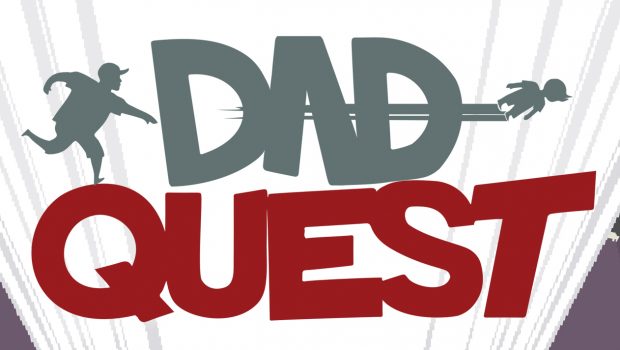 Summary: Either a Dad simulator or a Pigeon murderer simulator... either way, it's fun.

Indie games can be weird. I don’t that’s a surprise to anyone… but it needs stating before starting here. Dad Quest is weird! Again it needed stating. The basic premise is you are given a child and your job is to become the coolest (or Greatest) Dad. So far it sound normal enough (if odd for a game)… but it takes a turn for the odd when you are taught how to use your child as a weapon! Somewhat like Rygar, you can hurl your child at your foes and then retrieve them… alternatively you can use your child in a more club like fashion. So you set out of the training facility to learn what it truly means to be a great Dad. You also soon learn that there are people who just really don’t like Pigeons and you will encounter plenty of them… most of them harmless… most. Gameplay reminds me of old games like Blackthorne which is not too surprising given this is a 2D platformer with a slightly more modern twist. Really the developers have said it best themselves with “As you know, the Child is an indestructible force of nature and is able to destroy any object within seconds. Alone, the child can become a wayward son (or daughter), but with the unbreakable bond of love from their Dad, they can truly grow and become the weapon they were meant to be.” That is indeed true. That child who you first select grows in front of your very eyes and gains new abilities as they do so. As with many great games that leveling up is what keeps you coming back for more… but rarely does that leveling up have such a significant meaning. Not only is your child becoming more efficient at their tasks but they are actually growing up. The game is full of giggles with little nods to pop culture and just good old fashioned absurdity. Visually it has a lovely retro charm with it’s pixel graphics that remind me of some of the early adventure games from Sierra, though I don’t remember ever beating a bird to death with a child in any of them (though my memory is a bit hazy from my gaming that long ago). The whole thing is still in early access and there are signs of what is to come but at present it’s not a very long gaming experience. For the price it’s possibly best to wait until it hits full release… but if there’s a sale on it is a nice little pick up and play title.