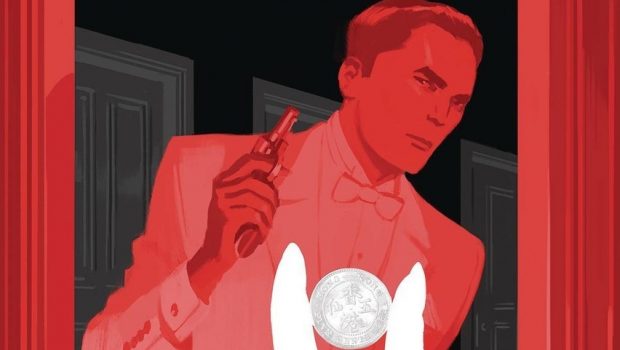 One thing after another!

Still reeling from the chaotic train ride, agent Dai and Shengli settle down in Harbin, only to be rattled by the news of Baolu’s grisly death. Meanwhile, the Lotus wastes no time, striking hard and with lethal force, with agent Dai in her sights.

This issue begins with a summit in Harbin, where we see the Chinese Resistance gathered and lamenting over agent Baolu’s murder. Dai and Shengli are shocked by this news, which makes them reflect on their own personal safety. They exchange charms, wearing them as protective amulets, hoping to ward off the evil forces that threaten to kill them. This quiet exchange, however, is cut short by the arrival of a giant monster hybrid that comes crashing through the wall. The beast makes short work of the people in its way, tearing and devouring them quickly and without hesitation. With its eyes locked on Dai, the creature closes in, determined to corner its prey. Before it can attack, it suddenly dissolves into a few hundred butterflies, heralding the arrival of the infamous Crimson Lotus. Her target is Dai, and she will stop at nothing to get her hands on him. The only problem is that agent Shengli stands between her and her next victim.

Like the previous issue, this is a fast-paced one, filled with plenty of action. My absolute favourite scene is where we see the Lotus face-off with Shengli. There are some serious wizard battle vibes here, with epic dragons, sonic power balls and people phasing through walls. Not all the action is in Shengli’s corner, with Dai encountering his own problems whilst trying to evade Lotus. Japanese soldiers pursue Dai relentlessly, resulting in some swashbuckling action from his end.

Whilst I absolutely love the fast-paced nature of the story so far, I do wish that it would pull back a little and slow down, so as to give us some more depth and development regarding their mission and personal objectives. Yes, we know what the problem is and what their mission entails, but little has been discussed about it since issue 1, and really nothing has been achieved except a lot of evading and running from enemies, which isn’t entirely a bad thing, but I just wish there was a little more complexity and diversity with the plot.

I also want to say, that I get the feeling that either of these characters could disappear at any time, as they feel quite dispensable in their roles. What I mean is that I won’t be surprised if either Dai or Shengli shuffle off this mortal coil at some point in the distant future.

Mindy Lee’s art once again rises to greet the fast-paced action in a wonderfully spectacular way. Yes, she can draw action and movement really well, with nothing feeling static or motionless on the page. The reason why I really liked the Shengli and Lotus’ encounter was because of how it looked. Shengli looks incredibly badass, like a woman you wouldn’t mess with and who can completely take care of herself. Meanwhile, Lotus throws powerful spells and illusions toward Shengli, resulting in some excellent visual diversity on the page. Michelle Madsen’s colouring really captures the moody and ambient night lighting perfectly. This entire issue unfolds during the night, resulting in a dark and dusky palette. There is also a lot of lovely colour during the Lotus and Shengli fight, which stands out in a vibrant and electric way.

Overall, this is turning out to be an action-packed adventure. My only gripe is that I wish it would slow down a little to allow for other developments to take place and form better.