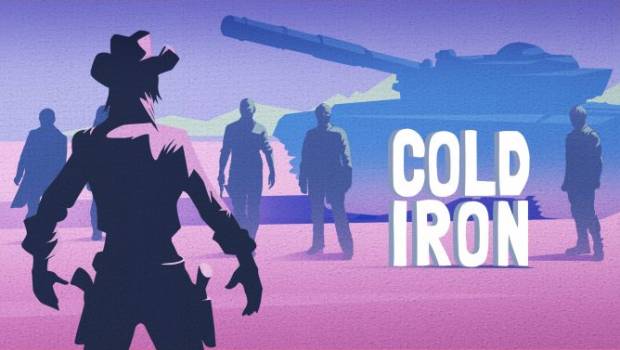 Summary: If you’re looking for a unique take on the shooter genre or just want to pretend you’re an inter-dimensional John Wayne for a few hours, then Cold Iron is an easy recommend and offers up far more variety than its simple premise would initially lead you to believe.

Coming from independent studio Catch & Release, Cold Iron is a curious title touted by its developers as being a puzzle shooter heavily inspired by media such as Stephen King’s Dark Tower series.

What this essentially boils down to is partaking in a series of gunfights where the quickest on the draw inevitably emerges victorious; it’s High Noon set against a backdrop of constantly shifting environments – Initially you’ll start by staring down your foes in a dusty Western setting but before too long you’ll journey through forests, decrepit futuristic cities, barren deserts and much more. You play the son of a notorious gunslinger who, after years of dispensing hot lead into unsavoury types, swears off a life of duelling and settles down to raise his family, burying his chosen instrument of death, the titular Cold Iron.

But the past has a way of catching up with you when you least expect it and, one fateful day, your family’s homestead is besieged by three murderous villains who execute your father and tear apart your home in search of something, although they eventually leave empty handed.

You know what the terrible trio were after, however, and endeavour to seek revenge, digging up your father’s trusty sidearm only to discover that it possesses a power far beyond that of normal weaponry; a demon inhabits the pistol, thirsty for vengeance, and you’re more than happy to feed it the corrupted souls of your foes as they fall, one by one, beneath a hail of gunfire. The story of Cold Iron really just serves as a framing device to justify the constant hopping between different locales but, despite the perfunctory nature of the narrative, I actually really enjoyed hearing the drawling narrator’s exposition as you’re shown garish neon coloured renditions of events.

The gameplay is almost deceptively simple, in that you’re constantly thrust into duels and must point your controller down, as if in a holster, and then quickly draw and fire upon your opponent when a bell rings before they manage to land a shot. That’s pretty much it in terms of objectives, although a you progress further into the game the duels each have their own idiosyncratic aspects to them. For example, one duel will see your opponent whistling in an attempt to distract you from the ringing of the bell. Another sees you relying solely upon your hearing in order to locate your enemy where yet another will see your foe hiding amongst doppelgangers, with only a bright flash of coloured lightning before the dual commences giving you an indication of which is their true form.

These little twists on the core gameplay help to keep things fresh and remove the monotony that would come if the game was nothing more than a generic western shooter; by adding in sci-fi and fantastical elements, the game constantly keeps you on your toes as you genuinely have no idea just how the next dual will differ from those that came before. Each match ends after the best of five rounds determines the winner, with different kinds of trophies awarded and even a superfluous but pretty fun series of bonus rounds between matches where you pop watermelons out of the sky and cause them to explode in a series of brightly coloured fireworks.

Of course, a decent concept isn’t enough to carry a game if the controls are lacking, but thankfully Cold Iron is fairly responsive and accurate when it comes to hitting your enemies. One minor gripe I did have was that enemies only have two death animations, one for squeezing off a perfect headshot and another for hitting them anywhere else – It would have been nice for context appropriate reactions, such as rendering a limb useless after hitting it or even just seeing your opponent clutch their leg or whatever in pain rather than reverting to one of the two standard animations. Generally only firing one shot per round also makes it a bit hard to gauge whether or not your VR set-up is picking up your controllers properly – It wasn’t until I played through the first bonus stage that I could see how accurately my shots were landing, prior to that I just pointed in the general direction of my enemy and hoped for the best, sometimes landing headshots and other times clipping their body. I mean, it worked, but it would have been nice to have the option to hone your skills and come to grips with the nuances of aiming on a shooting range or something similar prior to diving into the game proper.

Cold Iron is a relatively short experience, with my first playthrough clocking in at just under two hours, although if you’re a trophy hunter or determined to discover secret levels and the like then there’s more than enough incentive to dive back in for another few rounds. In all honesty, Cold Iron looks more than a little rough around the edges; the cartoonish aesthetic works well enough but nobody is going to be holding this title up against the more visually stunning titles available for the platform, such as The Inpatient or even Batman: Arkham VR. Character animations are, as mentioned above, fairly limited and your environments are pretty barren, but taking into consideration the limited budget behind the title, it’s more than serviceable and doesn’t ultimately impact negatively upon the experience in any way.

I really warmed to the soundtrack and narrator, both of which help to sell the concept of being a dimension-hopping gunslinger, particularly the music; again, whilst it’s nothing amazing, it definitely fits the themes of the game and, especially in stages where sound plays a pivotal role in your success, it works precisely as intended. Sometimes it’s the simpler experiences that really draw you in, especially when playing in VR; that’s not to say that I don’t wish Cold Iron was a little longer and had a bit more meat on the bone, but for a compact budget experience it’s well worth taking a look.

The rudimentary gameplay kind of takes me back to the old arcade light gun titles and, even when discounting the nostalgia factor, makes for a fairly engaging playthrough; as it’s a fairly sedentary game you can blitz through the entire game in a single playthrough, something I’ve come to appreciate after games like Superhot VR and Sparc made me realise that I have the stamina of a geriatric. If having one -on-one shootouts with liberal puzzle elements sprinkled throughout  doesn’t really appeal to you then it’s probably wise to give this a miss, as essentially Cold Iron is a duelling simulator and it’s only really in the bonus stages that the game opens up to become a shooting gallery like so many other titles available on PSVR.

If you’re looking for a unique take on the shooter genre or just want to pretend you’re an inter-dimensional John Wayne for a few hours, then Cold Iron is an easy recommend and offers up far more variety than its simple premise would initially lead you to believe.