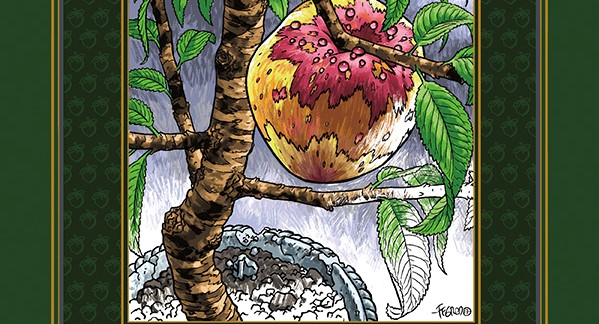 Dark Horse Books is publishing bestselling author Chuck Palahniuk’s novella, Legacy: An Off-Colour Novella for You to Colour. The book includes colourable illustrations by the two acclaimed artists, Mike Norton and Steve Morris. Its essentially an adult colouring book that comes with a dark and gritty tale about immortals, a dodgy banker and a very special peach tree. It’s compelling storytelling that’ll have you laughing out loud as you colour beautifully drawn images, leaving you with a one of a kind personalised artwork.

Impulse Gamer recently had a chat to Chuck Palahnuik where we got to talk about the growing popularity of adult colouring books, heirlooms, antiheroes and the immortality myth.

I like the idea of having custom books as heirlooms, allowing people to preserve a unique artifact that demonstrates their creativity. What made you want to explore this concept, and open up Legacy for others to alter and change?

Chuck: Consider that it’s not just an artifact, it’s also a way to create a gift specifically for some beloved.  Short story: when my grandmother was diagnosed with breast cancer she called to ask my three favorite colors.  Fearing she might die, she wanted to crochet me an afghan.  I still have it and will likely have it on my death bed.  I know this impulse to leave a souvenir or remembrance to comfort those people in the  future.

The popularity of colouring books has skyrocketed in recent years. Many claim that they are therapeutic, with the whole process being cathartic and helping with stress and anxiety. What are your thoughts on this?

Chuck: The New York Times Magazine ran an article on the brain science of coloring, two year ago.  According to the Times, coloring offers the satisfaction of creative expression, but without the anxiety of not knowing whether the design will be worthwhile.  As a group activity it’s replaced book clubs.  People gather to talk and color.  That said, the Bushwick Book Club is now commissioning bands to create music based on “Legacy.”  Bushwick will be sponsoring concerts on the East and West coasts where the audience will drink, dance and color in nightclubs.  How cool is that?

We often see stories with a protagonist who is flawed, with their motives focusing more on themselves, rather than others. What do you personally find so appealing about the antihero? Are they interesting because they are complicated and compelling, or is it just because the good guys are too one-dimensional and boring?

Chuck: You nailed it.  Heroes are a little tedious.  No matter what Joseph Campbell said, I’d rather read a book called “The Antihero with a Thousand Faces.”

You tell a very poignant story about a box of buttons that were a family heirloom, that is now lost. Have you kept this tradition alive and thought about starting your own?

Chuck: Alas, the button tradition has lapsed.  It’s hard to replace almost two hundred years of storytelling.  Zippers and Velcro make it unlikely that my family will ever fill another box with buttons that cue history lessons.  But I do have my own ritual for remembering my dead family members, and it allows me to recognize anyone I might meet who has ever written to me.  It involves small rocks, and it comes from my father’s family instead of my mother’s.  Enough said.

This book allows readers to directly alter its appearance, bringing their own details to the story. It’s an interesting concept about collaboration, and I’m curious to know where it came from?

Chuck: It comes from a joyous resignation.  Roland Barthes decreed the “death of the author” because the text is always finished within the mind of the reader.  Witness how many ways ‘Fight Club’ has been interpreted.  So?  So I give up and now embrace the idea that the reader will/must complete my work.  It’s a cop-out, but it’s the only realistic position to take.

The immortality myth is one of the oldest and most popular storytelling traditions. I rather like how you explore this in Legacy. What myths shaped and inspired these ideas?

Chuck: Embarrassing admission:  In 1990, when I first began to study writing in Tom Spanbauer’s workshop he told us, his students, “Chinese tradition states that in order to live forever a man must build a house, write a book, and have a son.”  My score is one out of the three.  But I prefer Martin Heidegger’s idea that creating a successful work of “art” guarantees immortality.  I ain’t building any houses.  And as for sons? Forget it. Legacy: An Off-Color Novella for You to Color goes on sale from Dark Horse Books in both comic book stores and bookstores on November 7, 2017.