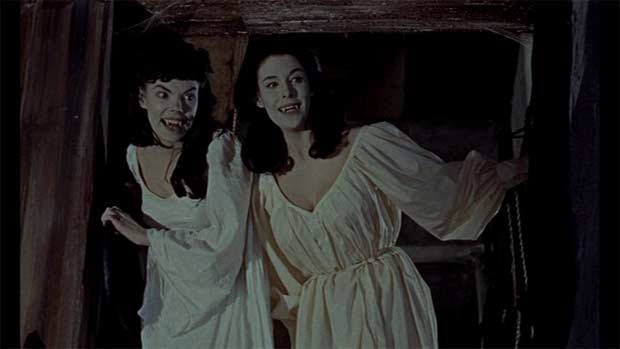 Summary: The beauty of Brides of Dracula is that it doesn’t rely on one performance to maintain audience interest and as a result succeeds as a classic

For those of us of a particular age, Hammer Horror evokes nostalgia for a particular strain of cinematic British Horror. Of horse drawn carriages charging through mist-shrouded forests, of castles atop craggy peaks populated with the grimmest of secrets, of beautiful, lusty women menaced by demonic figures in black, of upright men who hold back evil with a crucifix. Beginning with Dracula Hammer would embrace the gothic with gusto, and a string of successful, influential movies would appear over the next twenty years. After the raging success of Dracula, which starred Christopher Lee as Count Dracula and Peter Cushing as Van Helsing, Hammer were keen to capitalise on that surprise with another vampire tale. With Lee unavailable, he was replaced by David Peel as Baron Meinster. Brides of Dracula was the result. Beautifully shot by Hammer stalwart Terrence Fisher, Brides proved to be an entertaining sequel to Dracula.

Set in the wilds of Transylvania, Brides has all the hallmarks that came to characterise a certain strain of Hammer films. A village populated by an array of British character actors, overlooked by a menacing castle that harbours the darkest of dark secrets. When schoolteacher Marianne (Yvonne Monlaur) is deliberately abandoned there, she falls into the clutches of Baroness Meinster (Martita Hunt), whose friendly interest in her masks a terrible secret. The script plays it clever here – while the Baroness is up to no good, her evil is as nothing compared to that of her angelic looking son, Baron Meinster. Chained by foot, the Baron is hidden away in the castle, sustained by the blood of the women his mother lures to the castle. Unfortunately for the Baroness, Marianne proves more resourceful than previous victims, and frees the Baron.

It is at this point, thirty minutes into the movie, that Cushing makes his first appearance. In the absence of Christopher Lee, Cushing, in this understated performance, shines. Cushing, a gentle, kindly man devoted to his wife, is equally generous to his fellow actors. His Van Helsing is a learned man fanatically devoted to extirpating the vampire menace. Even though he comes late to the movie, it is his performance that binds all the elements of it together. Of special note for the viewer is the set design and its realisation. While the few exterior shots are spent filming the carriage as it drives to and fro, the rest of the movie is shot on set. The dressing for these sets, particularly the castle, is a sight to behold. The interiors are lush, filled with art and tapestries and furnishings that evoke the era Brides is set. The beauty of this movie is that it doesn’t rely on one performance to maintain audience interest. While there is nothing in the movie that a modern audience would find horrifying or scary, there is a certain charm to this mid-century example of horror. There are several iconic scenes that add to the atmosphere. The locks falling from the coffin without being opened; the madness of Greta as she welcomes a new Bride for Baron Meinster who digs herself free from her grave, Van Helsing ‘curing’ himself of vampirism with the aid of a red hot iron and holy water, and the high point – the use of the sails of the windmill to destroy Baron Meinster.

As befits the studio shooting of the movie, the performances are, aside from Cushing, of a theatrical nature. David Peel as Baron Meinster (this is his last movie before he retired from acting and went into something even more dodgy, real estate!) plays both sides of the character well – the put upon son robbed of his inheritance, and then the beastly creature playing havoc with the pretty young ladies of the village. Yvonne Monlaur as schoolteacher Marianne plays a bland role blandly and seems purely there for her healthy European looks. Martita Hunt as Baroness Meinster is probably the best of the supporting cast – there is an archness to her performance, particularly as she vainly attempts to hide her vampiric teeth with her veil, which is a great deal of fun.