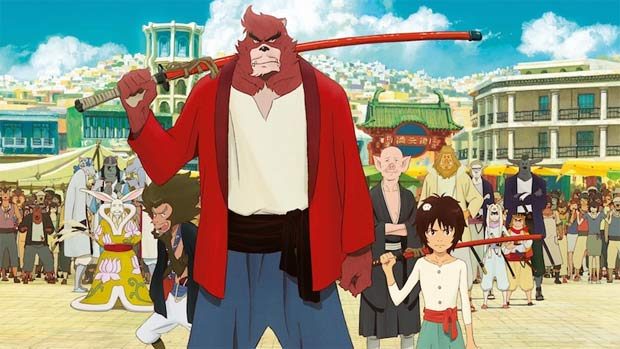 The Boy and the Beast Blu-ray Review

Summary: The Boy and the Beast is a beautiful anime tale about friendship, forgiveness and finding yourself in the world

This superb anime movie is directed by Mamoru Hosoda (Wolf Children) and is a film about diversity, friendship and overcoming grief as we follow two characters from two totally different worlds with a common link. In this fantasy world, animals have this human-like intelligence which creates this almost fairy tale experience, however the themes are more adult orientated as the world of humans and animals cross. The story revolves around nine-year old Ren whose mother suddenly passes away due an unforseen accident. Unfortunately for Ren, his father is not in the picture and when his distant relatives try to take Ren away, he runs away and is quite angry at the world for the deck of cards fate has dealt. To compound the situation for Ren, he is abducted by Kumatetsu, the unruly and undisciplined heir to Jutengai which is the world where these strange animal beasts live. So with both character having their own anger problems, they unwittingly become friends as Ren is forced to become his apprentice in order for Kumatetsu to defeat his nemesis Iozan and be worthy for the throne. So while Ren is trapped in this ‘animal’ world, Kumatetsu does move from a big brother to a father figure which includes the addition of other characters such as Kaede which helps flesh out the emotions of this angry and confused boy. However as the story progresses, something very interesting happens that is definitely a clever twist in this powerful coming of age story that I don’t want to spoil. Furthermore, the relationship between Ren and Kumatetsu is quite moving and the anger directed at each other early on is such a joy to watch unfold as they try to overcompensate for what is missing in their lives.

At times, The Boy and the Beast is almost like a buddy comedy but in this adventure, it’s like bad cop vs bad cop. Add in some amazing animated choreography and The Boy and the Beast not only challenges you from a cerebral perspective but even an emotion one with some great action thrown into the mix. Visually, The Boy and the Beast is quite stunning on Blu-ray and features some otherworldly animation with a fantastic and vibrant colour palette. Characters are well animated, backgrounds are quite pleasing and when mixed with the audio, it comes together like some Hollywood blockbuster. I should also mention that the character design really helps with the animation as well. The voice acting is another highlight and each actor gives something unique and entertaining to the characters that they portray. For special features, it is a little light but there’s a great making of documentary and also some cast interviews which nicely rounds out this release. The Boy and the Beast has easily raced to my top anime films of 2016 which features two wonderful protagonists with high-strung attitudes to boot. Sure, there are some inconsistencies along the way but for the majority of this coming to age story, the characters, plot and action creates a very compelling film from start to finish which ends on a high.