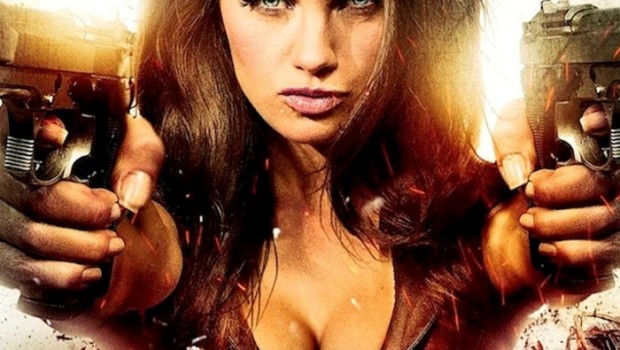 Summary: Bounty Killers is a joy to watch but the dialogue is a little cringe worthy but overall, this movie is a fun homage to a simpler time.

Bounty Hunter is a sci-fi thriller that is reminiscent of those classic 70’s exploitation style of movies and is based on the comic by Saine and Jason Dodson in this low-budget flick that is actually quite entertaining in a bad sort of way. As a result, it may form some sort of cult status. Bounty Hunter is set in the year 2042 that sees mankind caught in this post apocalyptic world of deserts, storms and devastation which is reminiscent of Mad Max with a touch of Kill Bill. Ironically, those in power, the corporations caused this economic upheaval and destruction of Earth which is where the Council of Nine come into play. The council have been put together to avenge the destruction of these corporations by issuing death warrants against these white collar criminals as they send forth the Bounty Killers. The story itself revolves around two protagonist, Drifter (Matthew Marsden) and Mary Death (Christian Pitre) who are Bounty Killers and have been hired by the council to hunt down those that threaten their institution in some truly bizarre and comic-inspired ways. It does help that they have the comic book inspired outfits and guns to help in their dispatch. The action is over the top and the social commentary is a little force and contrived but somehow this ramble of ideas, action and over the top characterisation actually works. It’s also quite bloody as they attempt to end the greed of the corporation. Think a little Kick-Ass and that’s what the high impact violence is like.

However the star of Bounty Killers is the villain who is played delightfully well by Kristanna Loken and has some great one-liners and scenes in the movie. Both Pitre and Marsden, the Bounty Killers are a joy to watch but at times, their dialogue is a little cringe worthy but overall, Bounty Killer is a fun homage to a simpler time but don’t expect too much.