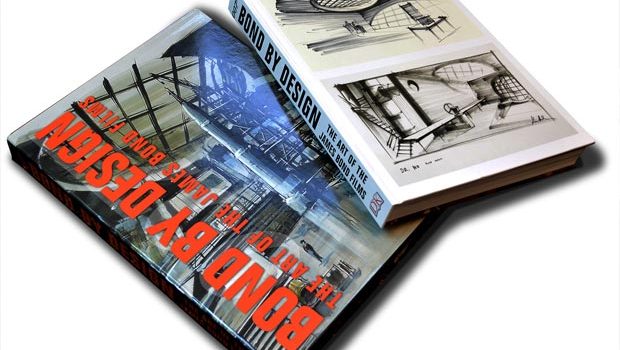 Bond by Design the Art of James Bond Films Review

Summary: Bond by Design the Art of James Bond Films is a great insight into the creation of 007 himself!

For film historians, designers or more importantly, James Bond buffs, Bond by Design The Art of James Bond is an intuitive look at the creation of this fictitious spy through the ages that include the films between 1962 (Dr. No) to 2015 (Spectre). It boasts some amazing sketches with detailed information about elements in the art design such as costumes, gadgets and sets from the James Bond universe. This hardcover book that comes with a great stylised slip case and two A4 posters is written by Meg Williams who successfully captures the spirit of Ian Fleming’s fictitious world and more importantly, the character that he created, 007. Bond by Design starts with three quotes from Sir Ken Adam, Peter Lamont and Dennis Gassner who have been involved in the franchise as Production Designers which highlights their passion and the privilege of working in the movie industry. The book is also split 24 films such as the 1965 Thunderball to the 1985 A View to a Kill and even the latest 2015 film with the Spectre. Each feature contains information about the Bond film with touches upon the story and explores other elements like the villains, sets and amazing spy gadgetry. Furthermore, it’s filled with amazing illustrations and imagery which gives you a great insight into the production of these films, particularly from the storyboards used and if you’re a fan of the film, it certainly sheds some light onto the detail that went in creating these films. Seeing Jaws from an early story board really put a smile on my face but also highlights the amazing behind the scenes work used in creating the films. Even rooms which may have only received a few seconds of screen time still played a key part of immersing the viewer into the story such as the pump room from Dr. No. Although gadgets are featured in this book, Bond by Design explores some of the more innocent props used such as the gold ingots from Goldfinger to the detailed costumes such as Major Anya Amasova’s uniform from The Spy who Loved me or Kara’s evening gown from Living Daylights. Some of the imagery in the book ranges from rough sketches to highly detailed drawings such as the steal yacht from Tomorrow Never Dies to architect plans from buildings. Another interesting element of the images in Bond by Design is that over the years, the drawings and designs show the change of art style and techniques which is quite a unique journey which also expands on the modern movie making process. The book comes to an impressive visual conclusion from the ‘Day of the Dead’ scene from Spectre which is a beautifully illustration of the scene from the movie which would make a fantastic poster. Finally, there is a bio of six of the production designers from the various era (Sir Ken Adam, Syd Cain, Peter Murton, Peter Lamont, Allan Cameron & Dennis Gassner) plus acknowledgments which nicely finishes this informative and enjoyable walk through Bond history. Bond by Design The Art of James Bond Films is like being part of the movie making process of the world’s most famous ‘spy’ which successfully captures the character, the adventure and even the romance. It’s beautifully presented with exceptional paper stock and a great hardcover slipcase which easily makes this item a great coffee table book. Kudos to Meg Williams and of course the production designers for sharing their passion and work with the greater world.