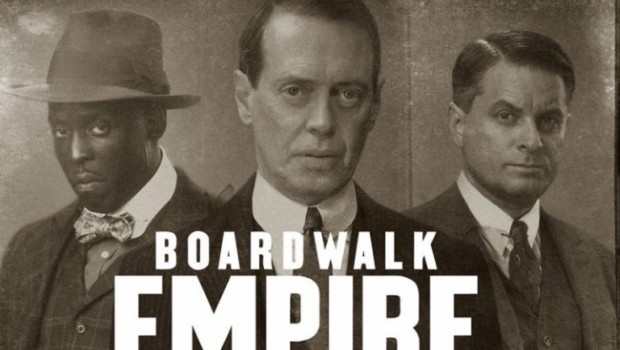 Summary: Boardwalk Empire is one of the most enthralling and well written series' that explores the psyche of the criminal elite.

After an explosive third season Boardwalk Empire pumps the brakes a little and gives viewers a more considered and slow burning series of episodes, managing to not only retain the high quality and captivating quality of the show’s finest episodes but also succeeding in being just as effective during its quieter moments as it is when the screen is lighting up with explosions and gunfire. Much like Breaking Bad did with Walter White, Boardwalk Empire essentially charts the rise of Nucky Thompson (Steve Buscemi) and his criminal empire as they both grow in stature against the backdrop of 1920’s Atlantic City.

This season, however, shifts the focus away from Nucky to give more screen time to the series’ antagonists and Nucky’s steadily dwindling circle of allies as they vie for the upper hand in the battle for control of the city, a conflict that, much like Walter White’s ultimate fate, seems to be leading to Nucky’s inevitable downfall and, more than likely, a demise that can only be attributed to his own self destructive lifestyle choices. Picking up after another jump in time between seasons – Eight months this time – Season Four sees some changes in the cast dynamic, with the most prominent being the addition of Patricia Arquette as Nucky’s new love interest Sally, a bar owner who also assists with Nucky’s bootlegging enterprise.

Nelson Van Alden (Michael Shannon) has assumed a false name and is living in Chicago amongst gangster royalty like Al Capone, with the antagonistic void left by his departure being filled by the ruthlessly pragmatic Agent Knox, who’s actually in the employ of J. Edgar Hoover rather than the prohibition task force he’s claiming to be representing. Chalky White (The Wire’s Michael Kenneth Williams), who has recently opened a Nightclub for black entertainers, finds his business under threat by newcomer Dr. Valentin Narcisse (Jeffery Wright), a heroin dealing theologist with designs on representing the black community and whose surreptitious scheming forces Chalky to seriously question his role as Nucky’s right hand man.

Elsewhere, Richard Harrow (Jack Huston) has hit the road in a quest for purpose after the events of last season, Willie Thompson finds himself gravitating towards his uncle and his lavish lifestyle, much to the chagrin of his father (Shea Wigham) and Nucky himself desperately tries to find a way to lessen his public profile without sacrificing his power. The season opens with a handful of slow paced but engaging episodes that serve to set up the characters and conflicts that will come to define the later episodes, with the pace steadily and satisfyingly increasing as the show builds to a crescendo with the climactic events of the final episodes and the shocking deaths that accompany them.

The two main antagonists this season play things quite differently to Gyp Rosetti and make for a refreshingly different, more deviously insidious threat rather than the writers futilely attempting to recapture the brilliant performance from Bobby Cannavale with an inferior cardboard copy of the character. The series as a whole does an admirable job weaving together its fictional elements with those character and events rooted in American history, taking full advantage of the rich and fascinating socioeconomic, racial and cultural movements that were taking place during the 1920s and season four further excels in exploring these themes in a manner that makes for engaging and thrilling viewing. Boardwalk Empire: The Complete Fourth Season come with a 1080p AVC encoded video presentation spread across four discs. With consistent contrast, naturalistic use of colour and lighting and exquisitely fine detail, the image quality is a high definition display of beauty, although it must be mentioned that there are some noticeable moments of crushing during some darker scenes. Aside from that though there are no major issues with the image like persistent aliasing or banding and overall the image quality is solid throughout.

The DTS-HD Master 5.1 lossless audio track is an extremely competent display of audio mastering with nice directionality and sound being delivered cleanly and evenly. The use of the channels make for an immersive experience, particularly noticeable in the multi-layered Onyx club scenes, and the action packed scenes come with a robust and dynamic quality that add sufficient impact to what’s playing out on screen. As with each previous release Boardwalk Empire: The Complete Fourth Season comes with a plethora of supplemental features exploring everything from production design, the new additions to the cast and much more. As well as commentary on select episodes, viewers are also given the option of turning on two pop-up tracks throughout the episodes, with Boardwalk Chronicle covering historical facts about people, events and locations and Scouting the Boardwalk offering an insight into how the production crew find authentic locations suitable for filming or able to be transformed to suit the needs of the show.

Also included is a Q&A with Terrence Winter, Michael Kenneth Williams, Gretchen Mol and Jeffery Wright, filmed after a screening of Erlkonig, a recap of the events from the previous season plus a look at the Onyx Club and the evolution of disfigured fan favourite Richard Harrow across the show’s four seasons. One of my favourite programs currently airing, Boardwalk Empire often seems overshadowed by some of its contemporaries and doesn’t get the recognition is so rightly deserves outside of its circle of ardent fans.

The series manages to be consistently engaging and effortlessly juxtaposes moments of shocking violence with deft and insightful characterisation, and the unique setting makes for one of the most visually arresting shows, with much of its aesthetic quality built upon the foundations of Martin Scorsese’s work on the pilot episode.

The cast are almost uniformly excellent, with Buscemi as mercurial as ever, and it’s only Gretchen Mol’s character who seems to be lacking this season, which is more of an indictment on the writers not giving her a satisfying arc rather than a comment on her acting ability.

If you’re a fan of the series then you already know that this, the penultimate season, is required viewing and only further exemplifies why Boardwalk Empire is one of the most enthralling and well written series’ that explores the psyche of the criminal elite, albeit also one of the most underappreciated.

Highly recommended (Although obviously, if you’ve not yet seen the series then Season 1 is the place to start considering the convoluted history of the show up until this point).