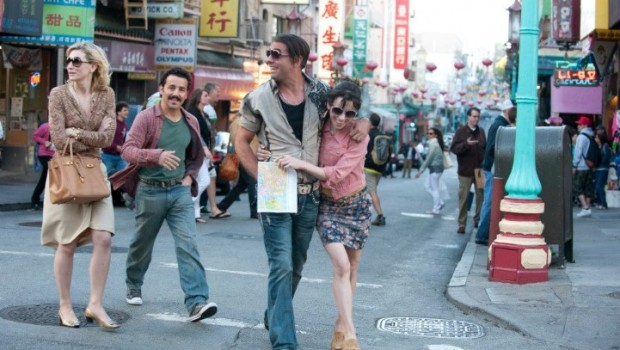 Summary: The film is darkly funny, often in a laugh out loud, self-deprecating way, but it also doubles as a cautionary tale. It is about the way that people delude themselves with their perceptions of the past and make bad choices in relationships that will eventually affect them in the future, until they realise the value of their perpetual lives.

Blue Jasmine opens with Jasmine (Cate Blanchett) talking to an elderly woman while flying first class. She continues to talk to the woman off the plane, describing her romance shared with her ex-husband Hal (Alec Baldwin). The other woman doesn’t know why she persists with talking to her but Jasmine categorises people purely on their social class, not on personality or even family. She expects people to empathise with her because of her misguided belief in social bonding. Her cruel judgements, particularly of her sister Ginger (Sally Hawkins), are a way of masking her own social inferiority complex. Jasmine wasn’t born wealthy. She married Hal and married into money. She could be referred to as “new money”. She feels inclined to protect her image by limiting factors of her past, including time spent with Ginger.

The film and its characters are faced with Adlerian psychology. In his book “The Individual Psychological of Alfred Adler” the Austrian psychologist says both the inferiority and superiority complex are related: “We should not strive to be superior and to succeed if we did not feel a certain lack in our present condition…If a person is a show-off it is only because he feels inferior, because he does not feel strong enough to compete with others on the useful side of life”. Jasmine adopts both complexes because once her relationship with Hal collapses she insists on trying to preserve her elitism and deludes herself of the downward spiral of her mental and financial state. Cate Blanchett’s performance is stunning, one of the darkest and meanest characters she’s played. She doesn’t supply mannerisms but embodies each angered or drooping gaze of Jasmine, who is doped up, depressed and in denial. Her voice’s tonal shifts are purposeful, attuned to deliver lines with an air of vanity or a mumbled growl as she talks to herself.

Adler also suggests that both inferiority and superiority are a movement of the past and the future. The past is the inferiority that the individual is trying to leave behind, while the future is the goal or movement for improvement. Each scene in the film reflects the conflict between the past and present life. Jasmine’s inferiority is expressed in flashbacks to her life in New York with Hal. The wide framing of the spaces and gold colour palettes give the illusion of the freedom and the illustriousness lifestyle. The clothes that Jasmine wears are highly formal and glamorous but also colour specific. A red dress expresses her jealous emotions as she grows suspicious and more vulnerable about the likelihood of Hal having an affair. In the present, Jasmine is broke and moves to San Francisco to live with Ginger and her two young sons in a working class neighbourhood. The spaces of the apartment are constricted and the costumes far more casual as part of a lower economic environment.

Both Ginger and Jasmine are given parallel storylines where their superiority complexes are fuelled by the way they look at the past. Ginger works as a checkout girl at a supermarket. She separated from her husband after they won the lottery but lost the money to Hal, who suggested they invest it. Ginger and her new boyfriend Chili (Bobby Cannavale) look angrily at the past, wondering what their lives could have been like if Jasmine and her ex-husband weren’t involved. This pushes Ginger into making some destructive choices for her relationships. Jasmine disapproved of Augie and is openly critical of Chili because both men are lower class people. They remind her of a life without status but also her own insecurities in the past. We learn she was a college dropout and now struggles with a computer course and that she has invented a new identity for herself because her real name is actually Jeanette. The only men that matter in Jasmine’s life, including her estranged stepson who was at Harvard, are the ones that are privileged and offer social advantage and luxury. They unknowingly fuel her superiority complex as she looks towards the future to try and escape her past. While working as a receptionist for a small dental practice, she resists becoming romantically involved with her boss Dr. Flicker (Michael Stuhlbarg). Her second engagement is more beneficial in sustaining her delusions. Dwight (Peter Sarsgaard) is a wealthy senator, who wants her to help decorate his house and then romance her. By lying about who she is she allows herself to escape from her past, which merely continues to inflate both her damaging superiority and inferiority complexes. The film is darkly funny, often in a laugh out loud, self-deprecating way, but it also doubles as a cautionary tale. It is about the way that people delude themselves with their perceptions of the past and make bad choices in relationships that will eventually affect them in the future, until they realise the value of their perpetual lives. Some character arcs are hopeful but other moments, like the ending, are refreshingly dark, bordering close to helplessness. There’s no room for sentiment in Cate’s colossal performance. It is a modestly directed film, with minimal touches from Woody Allen behind the camera, but the writing and the emotion drawn from the believable and grounded side characters, Bobby Cannavale in particular, are of an exceptional quality.