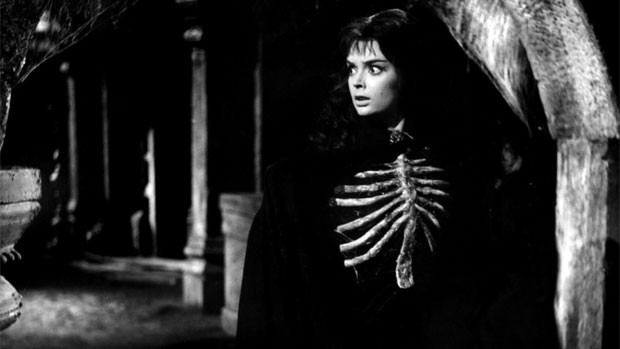 Summary: Black Sunday set the template for gothic horror during the 1960s

In post-war Italy, the rise of giallo (yellow, for the cheap book covers used at that time) in fiction and film proved a safe mirror of the excesses of the fascist era. Mixing horror and crime, giallo offered lurid entertainment to the masses. In movies, they came to be known for their outrageous crimes, bloody horror, sensual woman and an aesthetic sense that embraced high drama and grand guignol.

This is never more evident than in Black Sunday, one of the most beautiful horror movies of the period. Directed by Mario Brava, Black Sunday is an Italian gothic horror film from 1960. In a sense it leads the way for the Hammer horror movies later in the decade, but with an outlook more morbid and grim.

The movie opens with a totemic scene of villagers running amok, preparing for the execution of two witches. Before a demonic mask is hammered into her face, the beautiful witch Asa Vajda (Barbara Steele) and her paramour Javuto (Arturo Dominici) vows vengeance against her brother’s descendants for his perfidy. Two centuries later, Doctor Gorobec (John Richardson) and Doctor Kruvajan (Andrea Checci) are travelling through the area when by accident they come across Asa’s tomb. A sequence of events leads to her revivification and freedom, which allows her to seek her long planned vengeance. Let’s get the negative comments out of the way first. Black Sunday’s story is thinly plotted and written, the dialogue and character relationships are clichéd and hackneyed and the acting, particularly from Steele, is stilted and lacks depth. All of this, however, can be safely ignored as Brava has fashioned a visual triumph, a sumptuous feast for the eyes in black and white that allows the film to rise above the triteness of the material.

It’s difficult to underplay the beauty of the black and white cinematography. Where the acting or the writing frequently fall down, the visual element of the movie more than compensates. Cobwebbed, shadowy crypts abound with atmosphere. Empty, echoing castles, riddled with secret corridors, drip with menace and gloom. A fog-choked cemetery, with scattered, tilted headstones and dead trees grasping at the sky and a grave whose occupant has crawled from beneath the clutching soil.

The visuals add greatly to the atmosphere of Black Sunday. This is a movie of vengeance and death. Steele does a serviceable job in dual roles, as the witch Asa, and her own descendant, Katia. Steele is physically striking in both performances, bringing thwarted menace and repressed desire to Asa, and a winsome innocence to Katia. Her performance is purely physical, however, as Steele’s voice was overdubbed by another actress. The disjointed dubbing, a feature of the era, adds an off kilter feel to her performance, in keeping with the otherworldly nature that surrounds both characters.

In fact, the rampant overdubbing is a constant distraction throughout the movie. All bar two of the actors actually spoke English in this Italian movie, but separately recorded vocals for each of the characters were dubbed over the original voices. This is a real pity as while it works for Steele’s performance, the often stilted reading hampers the believability of the other actors, particularly Dr Gorobec who comes across stiffer than a board in his vocals.

Black Sunday is regarded as one Brava’s best movies. Prior to this movie, he acted as an (uncredited) director to three other movies, coming in at a moment’s notice to save productions whose directors had walked off the set. His earlier career in painting no doubt influenced his approach to cinematography, creating worlds out of light and shadow, and later, vivid colour. He is credited as the father of the giallo movies, those tense horror/thrillers that dominated the 1960s and 70s with the lurid plots, writing and cinematography. Black Sunday set the template for gothic horror during the 1960s. Later efforts moved out of the past into the present, presenting repressed sexuality expressed as savage violence, menacing beautiful women against a lurid backdrop of heightened tension and terror. Settle in then, for a movie that is a feast for the senses pointing the way to the future of Italian cinema.

A note on the restoration work on the movie. The original audio recording was mono. The dubbing is a distraction, as you watch lips move out of sync to the vocals, but this is an artefact present at the creation. I have praised the visuals of the movie, but this isn’t to ignore the face the fact that there are scratches and other blemishes present through the movie. It’s such a pity a more pristine copy wasn’t made available, but nonetheless, doesn’t overly distract from Black Sunday’s visual appeal. Finally, other than the trailers for other films in the Shock range, there are no extras.