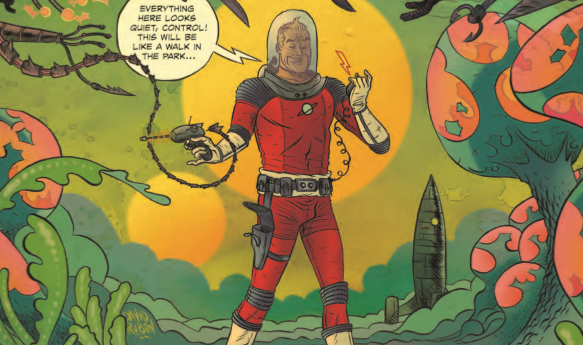 Summary: We discover more about Talky-Walky and his close relationship with Colonel Weird in this emotional and thought-provoking chapter.

A sad and revealing issue.

In this issue we explore the origin story of Colonel Weird’s companion and best friend, Talky-Walky. Guest artist, David Rubin teams up with Jeff Lemire to bring us an uncanny and somewhat melancholy adventure into time and space. Black Hammer #9: The Ballad of Talky-Walky begins in deep space, in the Osler star system, where Colonel Weird is investigating a distress beacon from an uncharted planet. After landing his ship on this strange planet, Colonel Weird decides to investigate the signal, but instead finds that his radio is picking up interference from some strange radio waves. He is then ambushed by a horde of angry robots and he quickly discovers that this is a hostile planet, ruled by machines who forbid any carbon-based life forms to enter. Outnumbered and overwhelmed, Weird decides that he must turn and face these machines, making one final stand before the end, however, a rogue robot quickly comes to his rescue and whisks him away in a flying saucer. Enter, Talky-Walky! We also see some scenes set in the present, that occur directly after the previous issue where Weird shot Talky-Walky with a laser gun. The narrative explores their relationship, jumping back and forth from the past to the present, focusing on their bond and the emotional breakdown that Weird is experiencing from his actions. This is a sad and somewhat emotional issue of Black Hammer. Not only do we learn about How Colonel Weird discovered Talky-Walky but we also see the events unfold after Weird shot his best friend. Prior to this issue, we haven’t seen a lot of Talky, apart from him being in his workshop making probes and the odd interaction here and there with some of the characters. This is the story where we explore more about Talky and what drives this character. A curious character, with a taste for adventure and exploring the unknown, Talky comes across as the most innocent and emotionally undamaged out of all of the exiled heroes. Now I get that Talky is just a robot, but he’s a robot with feeling and emotions and we see him/her experience fear and sadness. There is a particular moment in this issue that made my heart break, and it was incredibly powerful and sad at the same time. I love how Jeff Lemire injects pathos into his story and characters, which creates a deep sense empathy within the reader. He really has the ability to draw you in to the story and become attached to characters and respond to them in an emotional way. David Rubin steps in as guest artist for this issue, bringing his whimsical and playful art to the Black Hammer saga. Rubin’s interpretation of this world is both unique and fun, with comical and animated expressions, diverse action sequences and a sense of quirky energy. Like I mentioned earlier, this is an emotional issue and Rubin perfectly captures the sense of sadness and distress that Weird is experiencing, with his strained and haunted face expressing the horror that he is facing with the reality of his actions. I also enjoy Rubin’s panelling and layering of images, and find that his framing of certain actions or objects is a clever tool to draw the reader’s attention to these moments in a subtle way, which makes the whole narrative flow seamlessly. The colouring by Dave Stewart also brings an otherworldly edge to the visuals, as the palette is quite vivid and vibrant. There is also a luminescent quality to some of the scenes, which creates a wonderful sense of light. Overall, I thoroughly enjoyed this issue of Black Hammer. Both thought-provoking and moving, Lemire digs deep, revealing more about the emotional state and relationship of Weird and Talky. I’m also very curious as to what Weird is up to and how it will ultimately affect the overall larger narrative. Couple that with Rubin’s lovely art and this makes for an interesting and creative instalment to this story. Do yourself a favour and grab a copy ASAP!