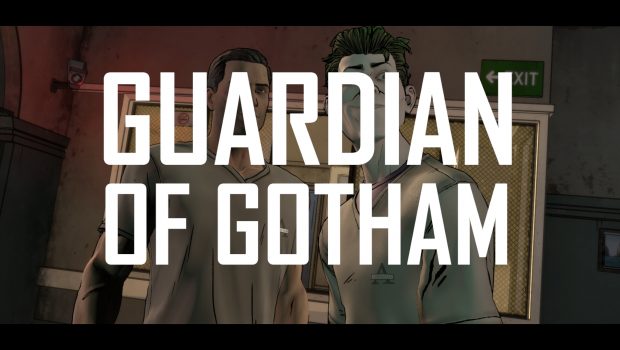 Summary: Seemingly at his lowest point, can Bruce Wayne claw his way back up and take back control of Gotham's streets?

I say this each time but it deserves repeating… I both hate and love Telltale games. I really don’t like episodic gaming… I’m four chapters in now and still find it frustrating to get so invested in a story only to have it stop and then I have to wait for a month or so to pick it up again. But on the other hand… they really know how to tell a story (the solution to this problem is arguably to wait until the whole experience is released and then simply purchase it as one complete package). When we last saw Bruce Wayne he was not having the best day. Episode four shows things didn’t exactly get better. Welcome to Arkham Asylum. It is here that we finally get a glimpse of the Clown Prince of Crime, the Joker… or as he is known here… simply John Doe. Though it would seem Bruce is down and out, arguably at his worst point… a glimmer of hope is sent his way and he is released from Arkham, but that glimmer of hope soon darkens as he learns just what has gone on while he has been locked up. Harvey Dent is getting more powerful and more dangerous and Oswald is getting closer to taking over Batman’s technology. So is it a case from bad to worse or can Batman turn the tide? There were a few more hints dropped through my experience that keep me clinging to hope that one of the main story arcs will have a “surprise” ending… but from watching some of the extra features (a nice little bonus) I’m somewhat prepared for it not to work out that way. I would explain more but I don’t want to set anyone else on this line of thinking in case it either ruins the surprise or possibly just builds an expectation that won’t be delivered. As before choices come up that really make you think about how you want thing to proceed… I did find a couple that were harder to chose than others and those are arguably the ones that really show how much of an impact the game has. The fact that you can get so invested in the character’s lives that you want to be careful not to take one approach over another… only to find that the choice you do make has some dire consequences… The replayability provided by the impact of your choices is definitely an appeal… given each chapter is only a bite size play experience (generally around two hours or so of play) it’s not too daunting to think about going through again and playing out different choices. Perhaps you get to the end of a chapter and see that you were in the minority in a choice selection and want to find out what others experienced in stead… or the opposite of that, you went with the most popular choice and want to know what is in store for the caped crusader if you take the road less traveled.

So I am yet again left eagerly awaiting the next (and in this case final) chapter. Hope is on the horizon… may the dark knight rise!