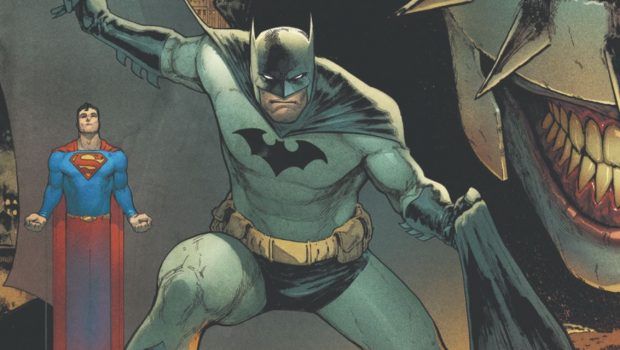 Summary: Sprouting from Scott Snyder’s Metal and Batman Who Laughs series, Batman/Superman #1 falls short on delivering a unique story worthy of the “world’s finest” duo despite an impressive DC debut from David Marquez.

This story centers on a relatively new character to the DC mythos in the Batman Who Laughs. The character himself is indicative of much of what I disliked about this issue – he’s yet another turn of a common comic book trope, “what if *insert hero* became *insert villain?*” This most recent pairing of Batman and Superman feels derivative of stories I’ve read plenty of times before. To drive that point home, there are actually panels reminding the reader of Bruce and Clark’s backstories – we’re even treated to Martha Wayne’s pearls again.

The dialogue is stilted throughout – with expository exchanges shoehorned in like, “The rich boy plays dress-up while you’re our alien savior. There is nothing that says we should be allies.” The inner monologues and dialogue between the two titular heroes provide little more insight than to explicitly tell the reader how different Batman and Superman are, violating storytelling’s most sacred rule – show, don’t tell.

David Marquez makes the jump from Marvel to DC with this issue and he doesn’t fail to show off the skills which made him a star. His figure work is impressive as he perfectly captures the looks and postures of Batman and Superman. The characters appear to move the way that you would expect them to. Marquez does a great job with contrast, expertly nailing DC’s oldest art litmus test, using body language to distinguish Clark Kent from his heroic alter-ego rather than a pair of glasses. The colors also do a great job of showing this contrast, keeping the Dark Knight shrouded in shadow while using Superman’s bright colors to pop against the grime of Gotham City. Marquez also manages to execute a truly horrifying page-turn, revealing the fate of the Dark Multiverse’s Justice League.

Marquez, in his highly anticipated move to the distinguished competition, has really hit the ground running.

The title of this story – “Who are the Secret Six?” – implies that the arc will amount to little more than a chance for Marquez to show off his designs for six Heroes Who Laugh. While they may look amazing, I’m not sure the premise is enough to keep me hooked.