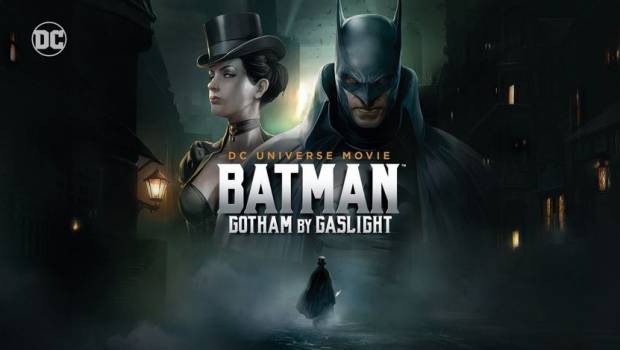 Summary: Batman Gotham by Gaslight is not quite as good as the comic but still worth a watch by fans and those curious about an alternate Dark Knight.

The DC animated universe has had its hits and misses, however these stories usually work better when they stick to the original source material. Batman: The Killing Joke was an example of less is more and unfortunately this key moment in the Dark’s Knight history was turned into something rather bland. However it is understandable that some artistic liberty is needed in order to fit a story or graphic novel into a feature-film which is also the case with Batman: Gotham by Gaslight but thankfully creates a relatively enjoyable story. Batman: Gotham by Gaslight is set at the turn of the century that has seen a Golden Age for Gotham City as the industrial revolution goes into the next gear. Unfortunately the citizens of Gotham, something evil roams the streets and this butcher is named Jack the Ripper. Police Commissioner James Gordon attempts to calm his citizens and uses as many resources as he can offer to capture the Ripper, however this serial killer is always one step ahead.

On the heels of the Ripper is Selina Kyle (aka Catwoman), a sultry singer and dancer who is attempting to track down this murderer which is where Batman comes into the picture. As a result of the uncertainty in Gotham City, a vigilante roams the streets who is known as the Batman (Bruce Greenwood) and together, they form an alliance to search the streets for the Ripper. Although this relationship has been done before, it is a twist on the traditional relationship between the Batman and Catwoman and one that works quite well. Adding to this story are the characters from the Batman mythology such as Hugo Strange and Robin who although have a similar core to their original characters, have been reimaged to suit this era. Compared to the graphic novel, the story does work well, even with the sometimes over the top artistic liberty thrown into the mix, including the identity of who the killer really is. Add some good voice acting and plenty of impressive animated scenes and Batman: Gotham by Gaslight is an interesting look into both the original comic and the world of Batman.

On Blu-ray, this release boasts some exceptional video quality and although the animation channels its inner Bruce Timm, it does look on our 60” LED TV. Audio is equally impressive and the creators really make use of that surround sound aspect. For special features, there’s a plethora of additional content and I really enjoyed the commentary by executive producer Bruce Timm, writer Jim Krieg and director Sam Liu who talk about bringing this graphic novel to life and how they tweaked and slightly changed the story to make it more sustainable as a film. There’s also some sneak peaks of the upcoming animated movies that include Suicide Squad: Hell to Pay, Justice League Dark and DCU Batman: Bad Blood that give us a taste of things to come. Batman: Gotham by Gaslight is a fun reimaging of this graphic novel that adds to the stable of enjoyable DC Comics animated films. Sure, it’s a little clichéd and over the top at times, not mention a little embarrassing with some of the cameos but overall, it’s a fun romp to the turn of the century as Batman takes on Jack the Ripper.