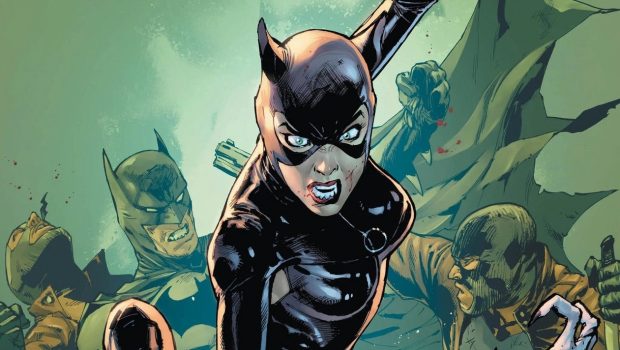 Summary: Batman is back!

While we still don’t know what is currently happening in Gotham City, on some level I just don’t care. Tom Kings entire run has really been about Bruce’s loneliness and how he reacts to changes in that emotion and here (even more so than last issue, we have Bruce Wayne back for the first time since issue 51. He sounds like Bruce again, he acts like Bruce again, and he has Selina again. Let’s see how it all goes down this issue.

Bruce and Selina are sitting at a bar in the Caymans (?) while a news report about Gotham is playing in the background. After Selina decks a fellow for agreeing with “Batman’s” new brutal methods, Bruce and Selina go to bed… and here is where Bruce shows his first major change. While too long to write out entirely, it can be summarized as Selina declaring that they alone care about Gotham (at least for those outside of Gotham) and Bruce agreeing with her. This takes Selina by surprise, as she thought she and Bruce were going to have another argument over whether they are partners or not. Bruce is simply agreeing with Selina because he knows he HAS a partner. Not like Dick and the others, not like Alfred, not like Clark. Bruce finally has his soulmate. Bruce and Selina take down a convenience store robbery (which the dialogue between the clerk and the unsuspecting robber is just great). Then we get a nice little surprise when it turns out Batman sent Damian into Gotham to get Alfred and Damian signals that Alfred is safe. While we know that Alfred is dead and Damian has been caught, the bigger surprise here is that Bruce is really the cause of Alfred’s death. I hope there is more to that in later issues.

Bruce finally has his soulmate.

Bruce and Selina send a message to Bane by taking down a venom transport run by Magpie (I think she’s dead and it’s a new one but who can tell these days), and with that Bruce and Selina prepare to go back to Gotham.

BUT! Not before we get the answer we’ve been waiting for. It was the street. Bruce knows it was the street where they met, but to him he wasn’t really Batman yet so he counts the first time they met as on the boat. Selina and he both agree that they should meet anew and decide to meet on the beach they currently stand on. A happy Bruce? A reinvigorated love? Bane is sooooooooo gonna get it…. But it still remains to be seen what happens when Bruce finds out that Alfred is dead.