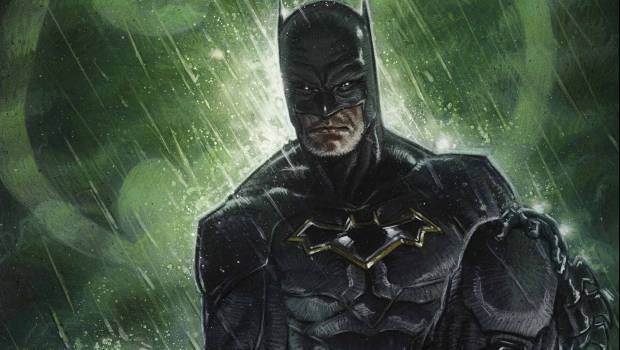 Summary: Bruce Wayne goes to court, Dick Grayson wears the Bat-Suit, and Tom King bores us to death. All this and nothing more in this issue of Batman.

After the disaster that was Batman #50, I had some real concerns about moving forward in this series. Let’s be honest with ourselves that the last few issues Tom King has put out have been awful; I mean, when was the last issue we actually got to see Batman out doing some real Batman work? So I decided to go back and find the last issue where Batman actually does something Batman-like, such as fighting an enemy and saving the day. That best man issue doesn’t count because Batman allowed the bride to get shot and instead of actually stopping the Joker, he actually prays with him… Get out of my face with this stuff, Tom King! It was issue #43 since we’ve actually seen Batman play a real hero. I mean, this is Batman we are talking about… One of DC’s Flagship characters and it has been well over a month since we’ve had a Batman story like the older days of Jeph Loeb. Now, I know this is a review for the latest Batman comic but as I was reading this issue I couldn’t help but feel depressed for the future of Batman. I used to love the writing of Tom King but lately he has just been turning out garbage like Batman is some soap opera instead of an action comic – heck it hasn’t even been a detective comic as of late. I want my old action filled Batman comics back, anyways I digress… let’s start with this review. First, I want to start with the story in this issue. I really expected something big after that kick in the teeth with #50. I expected Tom King to redeem himself, but what I got was a rejected episode script from Law and Order. Not even Law and Order Criminal Intent which was good, but the snooze fest that is Law and Order. The story consists of Bruce Wayne reporting for jury duty for the murder case against Mr. Freeze… Yeah… That’s it… This story jumped around so much and was so boring I had to go back to the beginning and make sure I was reading a Batman comic. It honestly was a waste of 21 pages; I could not find one redeeming point in the story. It was a choppy mess that just hurt my brain to read. When will I ever get to see Batman in his suit solving a crime and doing some real detective work while punching a bad guy in the face? Is that too much to ask? My next problem with this issue had to be the art, or the lack thereof. Once again I go back to my statement about this being a flagship title for DC and the art in this issue looked like something from an indie comic. Actually, I’ve seen indie comic with better art than this issue had to offer. This is Batman we are talking about here! This isn’t amateur hour. This is the big league! The only thing that was blander than the story was the art. Not only was the color just dull and unimaginative, but the detail in the work just left much to be desired. This was the worst looking Batman comic I have seen in a long time. As much as I love Batman it pains me to say this, but this is honestly one of the worst (if not the worst) Batman comics since the launch of Rebirth. Tom King plans to be on Batman for 50 more issues but if this is the stuff he is bringing to the table, it is going to be a LONG 50 issues. This issue had no redeemable qualities and will go down as my first 1 star review. I really wanted to have some hope for this series after the previous issue, but this just left me feeling hollow inside.