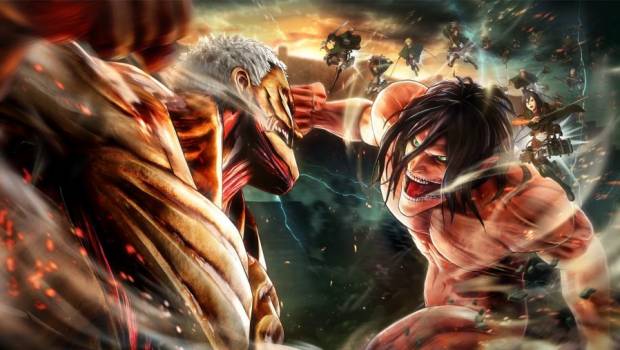 Summary: Swing through the city like an Anime Tarzan and take on lumbering rejects from Nirvana's "In Utero" cover in Koei Tecmo's Attack on Titan 2.

I was vaguely aware of the Attack on Titan series during the height of the Anime adaptation’s popularity but had never given it more than a cursory look.

Still, the premise was admittedly intriguing – After humanity has been ravaged by the sudden appearance of towering, skinless giants, they retreat behind the safety of three reinforced walls and form an uneasy truce with the ravenous beasts.

Fast forward a hundred years later and the first wall is breached, causing the last few remnants of society scrambling to defend themselves once again… Pretty awesome stuff, if I don’t say so myself. One of the best aspects of Attack on Titan 2, the imaginatively titled follow-up to, yep, you guessed it, Attack on Titan, is that you don’t need to be familiar with the source material or even the previous game to jump right into the action.

Through a comprehensive opening that deals with most of the necessary exposition and the decision to make your character present on the periphery during pivotal moments from the series, you’ll soon become well-acquainted with most of the important elements of AoT lore; this means that while the game is geared towards providing an entry point for newcomers, ardent fans can also revel in interacting with their favourite characters and seeing scenes they’re familiar with unfold before their eyes – Fan service often comes at the expense of accessibility but that’s not the case at all here. Gameplay in Attack on Titan 2 can essentially be broken down into two components – Exploring villages and interacting with NPCs in order to purchase new items, craft upgrades and similar tasks, and engaging in combat with the lumbering attackers.

There are some mini-game like sections, such as setting up supply towers and depots on the battlefield in what is a surprisingly fun little take on the tower-defence genre, but players can mostly choose whether or not they want to skip over these side activities in order to get to the meat of the game: Bringing the army of Titans to their gross flayed knees. Developer Omega Force have created a traversal system that makes for the smoothest swinging mechanics since Spider-Man 2; using a harness that can anchor to any nearby point, getting about the environment in Attack on Titan 2 never ceases to be a joy and you’ll soon be chaining together swings with well-timed speed boosts, activated by pressing X.

The harness’s purpose is twofold, however; not only does it let you swing through the air like Anime Tarzan but it also allows you to fling yourself wildly at a Titan, gaining the height necessary to attack different weak points on their body. This is achieved by locking on with R1, selecting a target point with the right stick and then launching yourself at the behemoth before unleashing a timed strike. It sounds a lot more complicated than it actually is and, once you get used to the timing of latching on and swinging your weapon you’ll be bringing down even the largest of foes without breaking a sweat.

The fluidity of the combat and traversal system just feels immensely satisfying and, although switching targets in the heat of battle can be a little overwhelming at times, there was never a moment where I screwed up where I could blame the controls over my own ineptitude. Unfortunately the Titans don’t really have the same benefit, being cursed with sometimes horrendous AI and getting themselves stuck in all manner of compromising positions; while free from nearby obstructions, you can attack the Titan from every angle, ensuring that you can strike their weak points, but once they get themselves tucked into a corner or huddled up in a group of similarly stuck buddies, you’ll soon find that hitting the necessary area isn’t as easy as it should be.

Most battles had brief moments where a situation like this would occur, and although the Titans usually fixed themselves eventually, it happened frequently enough to kind of pull me out of the game and sigh as I watched the creature jiggle about until it released itself from whatever had snagged it. Strangely enough, Attack on Titan 2 lets you create your own character from a small variety of presets, both of the male and female variety, but regardless of your gender your character will always be referred to as “He” throughout the game. It’s kind of explained away during the opening scenes but it’s an odd decision on the developer’s behalf that must have surely come down to budgetary limitations for the narrator and character voice acting.

Which is a shame, as the vocal performances on display here are all of the highest quality, as are the soundtrack and audio effects; the lack of a localised dub may turn some people off but this is par for the course for a Koei Tecmo game and has never impacted upon the overall quality of their output.

The cel-shaded art direction looks appealing and goes some way towards covering up the limited and sparse environments; the character animations are smooth and taking on a Titan is a visual spectacle, although things get a little stiffer when exploring the towns within the walls. Attack on Titan 2 is a surprisingly solid Action RPG with unique combat mechanics and a traversal system that’s probably the closest thing we’re going to get to feeling like we’re Spider-Man until Insomniac’s take on the character drops later in the year. Engaging a Titan in battle is always an exhilarating experience and the controls are easy to pick up but require patience and timing in order to fully master, although a little more depth would have been welcomed.

As someone who generally isn’t the target demographic for games like this, I found myself surprisingly taken by Attack on Titan 2 and soon become fully absorbed in the lore and my quest to take down the invading beasts and find the armoured Titan who had killed my parents.

Omega Force have shown that they’re capable of making solid a solid game outside of the Dynasty Warriors series and that experience with hack-n-slash combat translates nicely to the frenetically paced battles on display here.