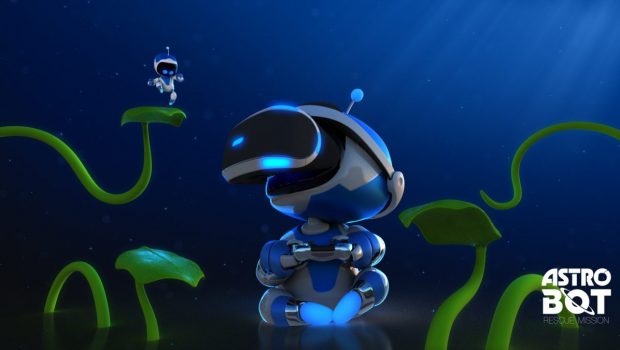 Summary: Sony's PSVR gets its best title yet with this delightfully whimsical slice of gaming gold...

Someone said to me the other week that if stores had kiosks which allowed people to experience VR titles firsthand then the format would be far more successful than it currently is, and I’d have to be inclined to agree with them; despite some extremely strong PSVR exclusive offerings, such as Resident Evil VII and Moss, the fact remains that many are reticent to become early adopters of this burgeoning technology and no manner of eloquently worded reviews or action packed video can truly sell the experience of actually being present within a digital world. Never has this been more evident when taking a quick look at the marketing and word of mouth that has sprung up around Astro Bot Rescue Mission; although the trailers showcase a vibrant and cutesy platformer and I could wax lyrical about how addictive and charming the gameplay is, I could never sell the experience you get the first time you pull on your headset and set foot into the wonderful virtual world that ASOBI! Team has crafted for you and your little robot buddy to explore.

It’s become hyperbolic rhetoric by this point to refer to playing Astro Bot as this generation’s Super Mario 64 moment but, truthfully, this is the only real way to hammer home how important a title this is for the VR format.

The comparison to Nintendo’s classic 3D platformer works on two levels, with the first being recapturing that feeling one experienced when playing a fully fledged three dimensional platformer and realising the wide world of possibilities that this foray into a new realm of gaming was going to unlock moving forward.

As someone who was around when the transition between 2D and 3D games occurred, I vividly remember that feeling of awe and wonder when I first was let loose within the confines of Princess Peach’s castle and this was a sensation that I’ve spent my entire subsequent gaming career chasing, to little success… Until now.

The second way the SM64 comparison is apt is in regards to the gameplay on display, with more than a few enemies, environments and even Astro Bot’s moveset itself owing a lot to Nintendo’s moustachioed mascot.

But, you ask, just what is Astro Bot Rescue Mission? The short answer is that it’s a delightfully nostalgic platforming game that takes advantage of the PSVR technology like no other game before it has quite managed. You team up with the titular character, a physical presence in the world yourself (You’re portrayed as a larger, but no less adorable, robot), and together you move through varied and visually stunning worlds, rescuing Astro’s lost comrades and defeating bosses in order to restore the spaceship they call home.

It’s a fairly barebones plot but one that works perfectly within the context of the type of game that Astro Bot is. Each level allows for myriad hidden robots and different abilities to unlock and use to help Astro along the way. Your Dualshock 4 controller is rendered within the game as well and unlocking certain chest will grant you new abilities such as shooting shurikens, spraying jets of water, illuminating hidden pathways with a spotlight and much, much more.

Each world features more than its fair share of level specific gimmicks and the game manages to somehow keep surprising you up until the final boss encounter, consistently finding new and inventive ways to engage the player with the environment. Astro is surprisingly easy to manoeuvre, with little adjustment period necessary to get used to the controls. Despite the entirely new experience of being in the world along with your playable avatar, moving about feels intuitive and everybody I showed the game to was hopping around with the simplest of ease within seconds, with no issues to be found with depth perception or fuzziness due to a combination of image distance and low IQ.

Astro’s moveset itself is a little limited but is more than enough to carry the little dude through the challenges presented, especially when used in combination with the Dualshock abilities; Astro can jump, hover for a few seconds using a jetpack that harkens back to Super Mario Sunshine, give his foes a little love tap or charge up and unleash a spinning attack to quickly take down anything in his way.

Again, although the moveset is, on the surface, limited, the game engages the player in unique and constantly fresh ways that never makes the gameplay feel stale in any way, particularly once you beat the main campaign and start dipping your toe into the waters of the challenge stages. Hidden in each main level, aside from the boss encounters, there is a chameleon blending into the environment. Find them and you’ll unlock a challenge stage, tasking you with anything from finding the shortest path through a level in the quickest time to squaring up against formerly defeated bosses again with some form of time limit or handicap applied.

These little levels are super fun and more than double the lifespan of the game, but oh Lordy will some of them make you pull your hair out in frustration.

Speaking of boss encounters, the ones available here are all a delight to play, providing just enough challenge to genuinely put your skills to the test and simply bursting at the seams with comedic charm. The size of the bosses must also be mentioned as well; often in games like this you’ll take on enemies who dwarf your character but here, being within the world itself and staring up at the towering four storey tall beast looming above you is an experience no amount of words will ever be able to adequately describe.

Each battle also makes use of the Dualshock abilities and provides some of the most frantic moments within the game, especially the latter two bosses. Without spoiling anything, the creature designs are appropriately menacing but retain the cartoon goofiness of the game’s aesthetic and discovering the identity, and subsequently the weakness, of each one as I made my way through the game was always a highlight of an already amazing game. Astro Bot Rescue Mission is hands down the best looking game I’ve played on PSVR to date. ASOBI! Team have crafted a world that is vividly detailed and colourful but also crisper and clearer than any other title. The variety of level types on offer, from the dizzying heights of a construction site to the murky depths of a graveyard, are all visually charming and make for a distinct visual palette than ensures you never feel like the developers settled for simply resusing assets to save time.

Soundwise, the game is filled with adorable little chirps from your robot buddy and the creatures that inhabit his world. The depth to the sound works perfectly, which is essential here as you’ll often be relying on your ears in order to locate hidden bots and chameleons.

Like, seriously, every tune is absolute gold and will get stuck in your head for days. All week I’ve been bopping around the house warbling offkey renditions of the songs from Astro Bot and, without fail, one of my children will immediately chime in and start singing along with me… That’s how goddamned catchy these boppy little dittys are and, for my money, they top even the best beats from Nintendo’s last few portly plumber titles.

I goddamned adore this soundtrack. Moss previously showed players that PSVR experiences didn’t have to necessarily be first person only and Astro Bot Rescue Mission exemplifies this mentality, taking things one step further than the more diorama-esque levels of the aforementioned title by placing players directly inside the levels themselves.

This works to great effect and opens up the world of Astro Bot to the player in a way that has never been seen before. Despite being a brand new title, Astro Bot is paradoxically a hit of nostalgia that leave you grinning from ear to ear, a throwback to the heyday of 3D platformers but given a new slap of paint that completely transforms the experience.

Astro Bot Rescue Mission is not only the best PSVR title to date, but also arguably the best platformer of this generation so far.

Hopefully Sony gives ASOBI! Team whatever resources they need in the future to create the inevitable follow up, because my only complaint here is that even with 26 main levels and a further 26 challenge levels, totalling around eight or so hours of gameplay, I have an insatiable craving for more Astro Bot goodness and found myself intentionally dragging my feet during the last two worlds simply because I didn’t want the experience to end.

If you have a PSVR, then you need to pick this up. If you don’t, then beg, borrow or steal a headset and a grab a copy of this game. This is the system seller Sony needs for the fledgling PSVR tech, it’s just a case of getting players to experience the game firsthand. The lack of player locomotion in the game means that motion sickness isn’t an issue and the tracking is as accurate as it can be, considering the limitations of the PSVR camera.

Find some way to play this any way that you can (but probably best to ignore that suggestion to resort to thievery, if you can).