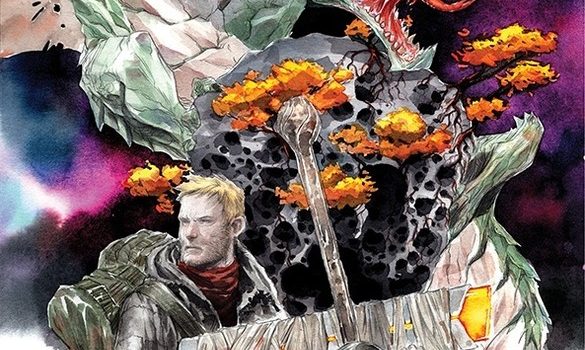 Summary: Ascender #4 once again hits the ball out of the park!

God, Mother is such a B+%$# It’s time for another issue of one of the greatest fastest growing comics on the stand, Ascender. Jeff Lemire can do no wrong in my eyes and this issue just cements that idea. Let’s dive in.

Mother, our evil witch, is awoken by a voice that ends up being a little girl (or boy) asking to be let out of it’s room. Mother declares “Never again”.  I’m going on the record to say I think this kid is Tim-21. It’ll be forever before we find out, but that’s my theory. Her sons run in and tell her that they resistance leader has been caught.

Anyways, We then go back our heroes and Bandit, who are both still in shock that Bandit just blew the forest goblin up. Dragons then attack and the trio are once again on the run. After being forced to jump off a cliff, they end up riding on the back of a GIANT TURTLE! First of all, this turtle is adorable as all get out. Second of all, Lemire’s imagination is fantastic. Giant Turtles!!!!

Back to Mother, she is brought to interrogate the rebel leader and here we learn that the resistance is starting to dabble in magic. The leader has no technology on him, but apparently he had the resistance’s own private sorcerer transform him into a living bomb.

The trio of heroes get to the sea and the docks, where they find our fair captain, passed out drunk.

This may seem like a short synopsis, but the other pleasure of this book is taking in this magnificent artwork. Water color painting has always been my favorite type of art technique and it’s amazing how much Lemire and Nguyen pack into each page. Magic is cold and blue while everything else (even the landscape that mother’s lair sits on, is more warm and vibrant. The animals and creatures are a great sight to see.

This book so far has had 4 issues that they have hit out of the park. PLEASE KEEP READING THIS. You won’t be disappointed.