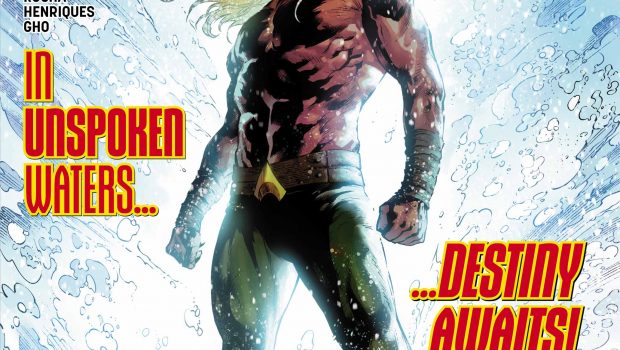 Summary: Aquaman #43 is a great jumping on point, as it is the start of a new story arc.

Aquaman #43 is a great jumping on point, as it is the start of a new story arc.  This ensures that a casual reader can step in without a need to know a lot of the characters back story.  It also begins with Arthur Curry having no knowledge of who he is or why he is where he is. This issue features two covers.  A standard cover and a variant that promotes the new movie.  The standard cover, by Rocha, Henriques and Gho features Aquaman standing front and center.  He’s standing on a rock as a wave crashes around him.  His hair is unkempt around him and he looks like he’s preparing for a fight.  It’s all topped off with the caption: “In Unspoken Waters…Destiny Awaits!”

The variant by Nicola Scott and Anette Kwok features Aquaman and Mera.  The duo are moving through the Ocean, flanked by sharks and rays.  You can definitely tell they’re intent on marketing the Aquaman movie as much as possible, as Mera and Aquaman are portrayed as they appear in the film, with the likenesses of Jason Momoa and Amber Heard.

Both covers look good, and give nods to the traditional comic Aquaman and the newer cinematic Aquaman. Robson Rocha handles the pencils on this issue, with Sunny Cho doing the colour work.  This book is incredibly well detailed.  From the backgrounds to the characters, the issue looks great.  The environment itself almost feels like a character with how well it’s drawn.  On the first page the Island feels alive, like some kind of antagonist, all sharp rocks and lashing rain.  The environment feels unforgiving, and when we are introduced to human characters, they appear either supernaturally untouched, or beaten down by the environment.  The water in the bay during the fishing scene in the middle of the book looks especially good, with every wave lovingly rendered and looking every bit as dangerous and unforgiving as the ocean can be.  This book looks great! Kelly Sue DeConnick has written this issue of Aquaman.  The story begins with a storm lashing the coast of a mysterious island.  A woman dressed in red wanders the beach, and a young man looks on from the entrance of a building.  We quickly learn that this is Aquaman, and within a few pages we learn that he has no memory of his former self.  Caille, the woman in red had found him injured in the sea and pulled him to safety.

Something is clearly wrong on the Island.  During a fishing excursion off the beach an old man is nearly swept out to sea, before Arthur saves him with some rope.  After saving the old man, the nets are pulled up on the beach and it is discovered that all the fish are rotten.  We learn that the villagers feel that they are being punished.  Years ago, they had banished Caille’s mother from the Island to one of the smaller rocky Islands off the shore.  They feel that she has cursed the island and its inhabitants, and the issue ends with them showing an image of Arthur’s past, and offering to restore his memories if he returns Caille to her mother. The book is a great complete work.  The art is fantastic and really gives life to the setting.  I like the amnesia angle and the setup for this particular arc.  It looks like it could be quite the supernatural story, and could allow new readers to get to know Aquaman as he relearns about himself.

Interesting start to a new arc and absolutely gorgeous art.  4 out of 5 stars.