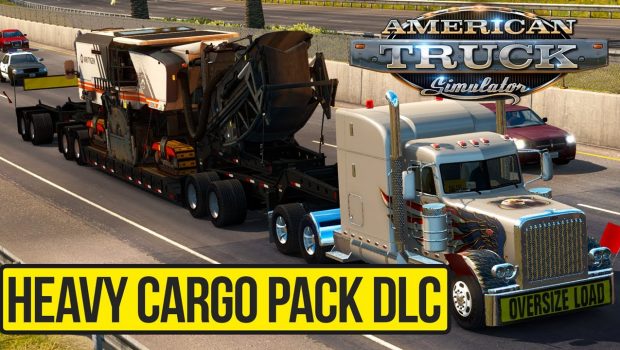 It’s probably safe to say I’m a bit of a tragic for these games now. I was first lured in under the guise of them being quite fun in VR (I’m yet to test this… but hopefully will in a month or so). But I found once I climbed into the cab I was hooked. I put on Star Talk Radio (I had to fiddle with the internet radio files to get it to work but it’s totally worth it to stream the stations you want) and off I go. It had been a while since I had climbed into the cab of a big rig though… other games kept me busy and I’d just left my little trucking empire to look after itself. But then the Heavy Cargo Pack DLC dropped and I had to get my truckers cap on, sound the horn and fire up the engine…. it wasn’t until I looked behind me that I realised they weren’t kidding… this new cargo selection is big… really BIG! If you thought you had a handle on the whole reversing into a spot, reversing round the odd obstacle here and there to get you full parking bonus… that all gets thrown out the window when you add an extra coupling or two. The main drive is the same… albeit you need to allow just that little bit extra width when making certain turns. What ever you do, don’t get yourself stuck in a situation where you have to reverse to get back on course… it will throw you for a loop. That’s not to say it can’t be done but it’s like learning the reversing mechanic all over again. I also found my old nemesis of that little raised platform on the way in to one of the drop off sites got me again… I didn’t allow enough space for my turn and as such the truck happily came off the end of the platform, but the rear of the truck was part way on part way off… and this didn’t become apparent until after I was well and truly wedged on it… after a lot of patience (that’s what I’m sticking with)… I managed to edge forward enough to release the whole thing and finally got myself parked… but it was the most frustrating delivery to date. But it’s still the big machines that we know and love and now we have a chance to drive real road trains around the country! A fun addition to the rest of your trucking collection… if you’re playing it… chances are you too are a tragic… it’s not overly pricey and it’s a lot of fun looking behind you and seeing a huge piece of earth moving machinery or similar on your truck as you cruise down the interstate!