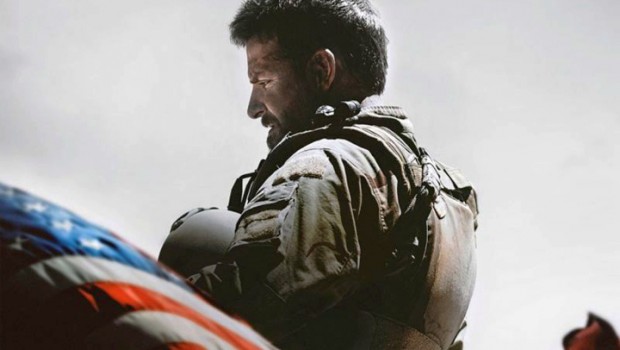 Summary: American Sniper is in many ways a Western – good men attempting to bring order and justice to a wild frontier

Union General William Sherman, who engineered the devastating March through Georgia that did so much to destroy the resolve and warmaking ability of the south during the Civil War, is credited with saying that war is hell.

After watching American Sniper, clinically directed by Clint Eastwood and starring Bradley Cooper as Chris Kyle, the deadliest sniper in American war history, you will think not only that war is hell, but that it is a cruel beast that devours its victims by inches and scars their families waiting fearfully across the water at home.

As a child, we see Kyle schooled by his father that the world is comprised of three types of people; sheep, who follow, wolves, who prey on the sheep, and sheepdogs, who protect the sheep.  In adulthood, Kyle searches for a meaning to his life, and in the embassy bombings in Africa in the late 1990s, finds it by signing up to be a SEAL and in effect becoming a sheepdog protecting his family and country.

In the shadow of 9/11, Kyle begins his first of four tours of Iraq, acting as a sniper watching over the soldiers going door to door to uproot the resistance to the American invasion.  Kyle is very, very good at his role, but that doesn’t protect him from the corrosive effects of what his role entails – shooting dead as many insurgents as he can, whether they be man, woman or child.

The first twenty minutes of the movie are a flashback looking at Kyle’s early life, his enlistment and marriage, bracketed by the moment of his first kill – a young boy carrying a grenade towards a group of patrolling soldiers Kyle is tasked with protecting.  Eastwood briskly moves through these early years, displaying Kyle’s early confidence and sureness of purpose. Afterwards, the movie, which is based on a book Kyle wrote about his four tours of Iraq, finds a narrative in the hunt for a rival sniper, a Syrian Olympian who lethality matches Kyle’s, and whose cunning and singleness of purpose is responsible for the deaths of dozens of American soldiers.

It’s no secret that director Eastwood is a card carrying Republican – his memorable chat to an empty chair at the Republican nomination convention in 2008 is testimony to that.  But his subtlety as a director belies any crude generalisations about his politics.  No matter how good or noble the purpose, Sherman was right; war is hell and with cool efficiency, Eastwood strips bare the terrible toll of war on Kyle and his family.

Whatever the merits or otherwise of the US invasion of Iraq, whatever the consequences to America’s standing in the world or to its finances, the takeaway from American Sniper is that those who are at the pointy end of American foreign policy, the grunts going door to door each and every day on increasingly fruitless patrols, are the those who bear the brunt of the physical and psychological damage of that work.  Kyle’s mantra to himself and his wife (Sienna Miller in a thankless role that generates a great deal of sympathy) is that he is fighting to protect America and American’s from the evil savages across the waves.  Fight them there so we don’t have to fight them at home, was the cry that went up soon after the Towers came down in 2001.

Kyle engaged in four tours of Iraq, each of nine months length.  He killed and he killed and he killed and he killed.  As the movie shows, he becomes obsessed with killing the Syrian sniper who has claimed the lives of a number of the men in his group.  The toll this takes on Kyle lies at the heart of the movie.  Killing children, killing women, killing men.  It corrodes the soul.  It steals from his wife the man she married.  On his return home, Kyle becomes more and more distant from those he loves as his obsession steals him from them.  He watches DVDs of insurgent propaganda from Iraq, showing American soldier’s being shot and killed.  Things he has seen in Iraq that draw parallels with his life at home, even innocuous events such as a van driving past, reveal how close to the bone the horrors of war for him dwell.

When that hunt for the Syrian sniper ends in success, does the movie change gears as Kyle begins to adapt to mustering out and rejoining civilian life.  In many ways, this part of the movie should’ve been the main thrust.  War movies are ten a penny; the struggle of adapting to life afterwards is rarely depicted.  The focus of the script, based as it is on Kyle’s book, is perhaps a missed opportunity.

What we do see is Kyle working with soldiers who have survived with terrible injuries.  Multiple loss of limbs, gunshots to the face, crippling injuries that mark out in scar tissue the terrible toll of a misbegotten adventure in US foreign policy.

The recent commemoration of the 100th anniversary of World War One reminded your reviewer of the stories and photos of those men who flung themselves into the meat grinder of the Western Front.  Some were called cowards and were shot for breaking under the strain.  Today, we would understand them to have post-traumatic stress disorder.  The reminder is that while the methods and machinery of war has changed, the effect on the men and (now) women in the front line is as devastating as it has ever been. Overall:  American Sniper is in many ways a Western – good men attempting to bring order and justice to a wild frontier.  It’s fitting then that the director of Unforgiven also directed this movie, because like that earlier effort, Eastwood brings humanity to a simple tale of good and evil.  And the real tragedy lies at the end of the movie – just as Kyle regains his humanity, he loses his life to someone more damaged than he ever was.  4/5

Visuals:  filmed in part in Morocco, Eastwood convincingly captures the chaos of war in an urban landscape characterised by chaos and decay.  The visuals match the landscape they display – the light is harsh in Iraq, while at home it is more moderate and calm.  The night scenes are never murky and there’s sufficient detail to enable the viewer to tell the participants apart.  The final battle scene, lost in a howling sandstorm, tells you a lot about the fog of war. 5/5

Sound:  choppers roar overhead as gunfire erupts at street level.  On your reviewer’s set up, all the concussive blasts came through as crisp as you like.  Dialogue was never lost in the soundscape built up over the course of the movie. 5/5

Extras:  two special features are included in the blu ray release.  One Soldier’s Story: the Journey of American Sniper.  This featurette talks to the principal participants in developing the script and bringing it to life as a movie.  They talk about the initial approach to Chris Kyle and how the script writer Jason Hall gained Kyle’s confidence then embarked on shaping a script around the concept of Kyle as Achilles, the ultimate warrior.  It also looks at the impact Kyle’s wife, Taya, had on the script and how Brad Cooper transformed himself into Chris Kyle.  Most remarkable about the featurette is Clint Eastwood.  Now well into his 80s, the man consistently brings high quality movies to a new audience year in and year out, with a great deal of conviction and grace.

The second feature is The Making of American Sniper.  More traditional and reverential in its approach to the subject of Chris Kyle it again features cast and crew talking about the movie.  There is also interview footage conducted in the lead up to the movie’s release that is more unvarnished, allowing a look at the emotional toll the movie took on Taya Kyle and also the participants.  4/5