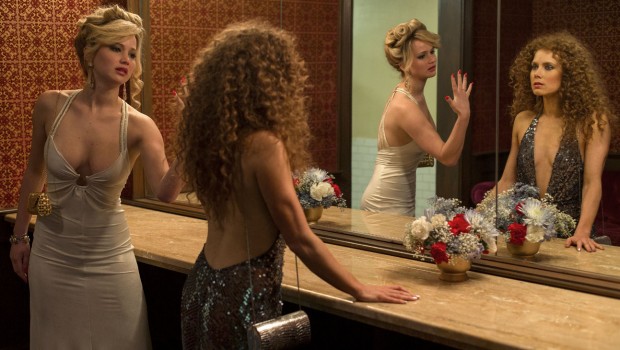 Summary: Taking its cue from the quote used at the beginning of this review, American Hustle demands of the audience its fullest attention and respect for the craft and performances on display.

1970s American cinema sits sandwiched between the fraying of the studio system and the excesses of the industry in the 1980s. In that uncertain, morally ambiguous period we see a faltering economy, national self-flagellation over the failure in Vietnam, the humiliation of Watergate and Nixon’s resignation and a decaying urban infrastructure that reflected the overall sense of malaise and corruption. But the decade provided fertile pickings for US cinema. The relaxation of restrictions on the content of films allowed a generation of filmmakers (think Lucas, Coppola, Spielberg or Altman) to tackle themes and stories that dared to examine this dark underbelly of the America. A new golden age of cinema arose dealing with themes and ideas not seen since the 1930s – crime (The French Connection) corruption (Serpico), violence and alienation (A Clockwork Orange, The Deer Hunter) and examinations of the corruption of the American dream (The Godfather 1 & 2).

Forty years later and the 1970s is viewed in yellowed sepia tones of faded nostalgia. On Australian television, we see Puberty Blues fixating on Australian culture in that period. Not so very long ago, That 70s Show mined a rich, satirical vein of humour. The interest of filmmakers and audiences today seems as strong as ever. Nixon/Frost, American Gangster, Zodiac, Boogie Nights and Watchmen are movies that examine the era from a multitude of perspectives and experiences.

Add to those ranks American Hustle, which takes as its inspiration the ABSCAM scandal that saw a number of US Congressmen arrested and jailed for corruption. Directed and co-written by David O. Russell (The Fighter, Silver Linings Playbook) American Hustle is part caper movie, and part wry examination of that period. What lifts the movie from being a straight crime thriller comes from Russell’s re-writes of the original script by Eric Singer. These changes turn the script into a sprawling black comedy that allows its four central characters to take on lives of their own, instead of following the standard tropes one would expect of similar character types.

The sense that we are in a movie set in the 1970s emerges in the first scene. Christian Bale (Irving Rosenfield), unrecognisable from his chiselled portrayal of Batman/Bruce Wayne, is shown in all his paunchy glory, carefully fixing a toupee to his scalp with adhesive. While there are more glamorous scenes in the movie, tellingly, there is a definite seediness to proceedings reflecting the desperation and exhaustion not only of the era, but also of the characters. We see this particularly with Amy Adams (Sydney Prosser), who is willing to cast aside her real identity for that of a glamorous, though definitely fake, Englishwoman. The quote used at the start of this review essentially tells you everything you need to know not only about her, but the movie itself. Brad Cooper plays FBI agent Richie DiMaso, desperate to climb the ladder at the Bureau. Cooper is always an interesting actor to watch. The cockiness and smarminess of DiMaso mask a vulnerable character desperate for something better in his life, to escape the dull drudgery of a domestic life that threatens to suffocate his ambition and hopes. While he manipulates those around him, the fissures in his character show the real person beneath.

DiMaso arrests Irving and Sydney in the midst of their latest scam. Instead of pursuing charges, he dangles the chance of escaping prison if they help him in his larger plan to catch corrupt politicians. His efforts focus on the Mayor of Camden, New Jersey, Carmine Polito (Jeremy Renner), who works the shadier side of the street in his hopes of urban renewal.

Adding complexity and unpredictability to the plot is Irving’s wife, Rosalyn (Jennifer Lawrence). While in love with Sydney, Irving feels he can’t leave his wife in case he loses contact with their son. Lawrence is superb here, at turns wide-eyed ingénue and then manipulative by her neediness.

American Hustle is something of a sprawling epic. A more streamlined movie would have jettisoned the absorbing character study. The convoluted nature of the plot matches the convoluted lives led by the main actors, which reflects the messiness of real life and makes them more human and relatable. Economy of pacing has its own virtues, but often at the expense of a deeper appreciation of a movie’s themes.

Several sequences in the movie deserve praise. The sequence with the mafia boss (Robert De Niro) and the fake sheikh are high in tension, with the confrontation between Sydney and Rosalyn a perfect counterpoint. The nightclub scene with Cooper and Adams displays to perfection the raw sexuality and abandon of the decade and strips to the core the desperation and need of both characters. Russell, in the making of documentary, talks about searching for truth in the characters, and it is scenes such as this that demonstrate this.

American Hustle is a triumph. It continues a great run of movies from director Russell. While Hollywood has been, and for the foreseeable future will, continue to obsess over blockbusters, sequels to blockbusters and strip mine existing properties, movies like American Hustle demonstrate the art at its highest form. Taking its cue from the quote used at the beginning of this review, American Hustle demands of the audience its fullest attention and respect for the craft and performances on display.

Visual: the faded tones of the 1970s are brought to beige life. Scenes are drenched in movement and colour and texture. Full credit to the costumers and scene designers for evoking a lost decade of excess. There’s an energy and life to most of the scenes that comes across beautifully on the smaller screen. The blu-ray does justice to the experience at the cinema. 5/5

Audio: the score, by Danny Elfman, evokes the era in all its hypnotic excess. The choice of music for key scenes, such as the nightclub helps heightens the emotion of key scenes. 5/5

Making movies is all about choices. What’s left out is as revealing of the director’s intent as what makes the cut. The deleted/extended scenes section demonstrates this. We see the ‘Live and Live Die’ sequence with Jennifer Lawrence’s character, and then an alternate take with a different song that lacks the emotional power of the former. The other scenes show the actors riffing on the script, taking it as inspiration and then running where the moment takes them. 4/5

What are we to make of the movie making process? Glad handing, backslapping, air kissing pretender courting the paparazzi while simultaneously fleeing them? It’s easy to condemn the phoniness of Hollywood, and the pretensions of its stars, in front of and behind the camera. So it is a real pleasure to watch those involved in American Hustle speak with passion and insight into the creative process. For those of us who go through life chained to a desk, the act of creation is often a stranger to us. The mystery of making things, whether it is a carpenter knocking together a table, or a writer pouring over words on a screen, or an actor, seems to hold an endless fascination. In this making of documentary, we see the principal participants in American Hustle discussing how the movie came together, and (to use that dreaded word) the process of film making. For those of us fascinated by movies, such an incisive and involving look at the behind the scenes of a major American production is welcome. 5/5