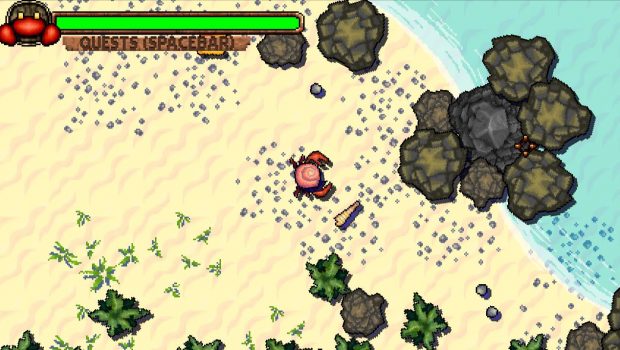 Adventures on the Polluted Islands Review

Summary: This wasn’t fun twenty years ago. And isn’t now.

Back in the early days of mouse-based PC gaming (i.e. 286/386 custom builds), there were a slew of games dedicated to the ol’ find and seek. Meaning, encounter an NPC, NPC requests items for a reward. Traipse about an area to locate item, back tracking each one to the NPC. Unlock the reward, move on to the next NPC.

These games were also intended for a younger audience, as kids seemingly (snicker) wouldn’t mind passing the time completing monotonous tasks in a somewhat sequential fashion. The problem here is, Adventures on the Polluted Islands isn’t necessarily intended for kids, and no longer 1988. Notice the part on ‘early days.’ This was an unfortunately mind numbing mechanic for an array of reasons, all of which led to both excessive boredom and frustration. There are few things more irksome in a game than errand boy posing as hero. Let alone backtracking through the same areas over and over again sans story variance. Add no proper map for the great finish, and it’s a scavenger hunt to nowhere.

Twenty years later, the best and worst part of STEAM is the ability to experience literally thousands of unique titles, an opportunity for developers to try something different. I’ll definitely hand it to Something You: Adventures on the Polluted Islands is certainly unique.

You’re a crab stranded on a deserted island, one overrun by far too much hazardous waste and confused sea creature baddies wanting to kill you. Thankfully, said crab has a strange ability to yield a boomerang in self-defense, making the baddies more irritant than threat. The same crab can grab, toss and manipulate objects needed to complete tasks. Yup, that’s one crafty crustacean. This game, while cute in concept, truly struggles in execution. It took an email to the publisher to get them to add a control scheme, one which works decent but not great either in traditional (keyboard plus mouse) or mapped (to STEAM controller). The aiming dynamic is always just a bit off from where it should be, requiring a slight crab backtrack each time to avoid getting hit.

The biggest offender in Adventure on the Polluted Islands, however, is the shocking absence of an overhead map and/or logic why certain objects can be passed through or under. Endless trial and error to navigate limited passageways gets old fast. Compound this with backtracking as the core game dynamic, and it’s memorize every damn detail of a poorly crafted level or suffer the consequences. The tutorial is anything but, as it’s seemingly impossible to complete. The level cuts you off at the oddest of places, and one can only wander so much before they abandon the polluted island ghost. All in all, the softest criticism I can provide is that Adventures on the Polluted Island doesn’t feel finished. Your first impression of the game speaks volumes. The opening ‘cut scenes’ aren’t, asking for an ENTER of ESC press to advance or skip. But both do neither, instead, go to a second static screen and ultimately our crab with a boomerang.

Nothing interesting going on here. Endless wandering, no maps, and a game dynamic boring even twenty years ago. It’s a shame, as this is actually a pretty cute concept that fails to execute.

Retro look, and it accomplishes it. 16bit era textures, albeit generic.

Nothing exciting, simplistic sound effects and music. Beachy but meh.

Three bucks, but I’m not sure I could recommend it even at that price.

Adventures on the Polluted Islands is a throwback game perhaps better left thrown away. It feels unfinished, is monotonous in its game mechanic, and arguably only for kids who don’t mind killing times via endless rinse, wash, repeat. Even Sebastian the Crab wouldn’t like this boomerang yielding adventure.