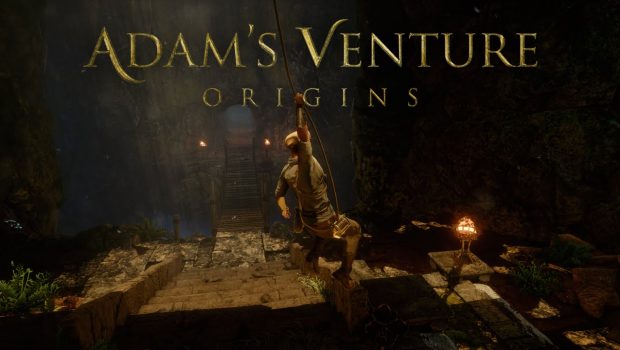 Adam’s Venture Origins is the latest in Indiana Jones inspired adventure gaming. That may be a bit harsh or an oversimplification but the parallels are quite apparent… that’s also not a bad thing, after all it’s often said “imitation is the sincerest form of flattery”. Basically you are Adam Venture (Ad Venture get it)… you’re father is a great scholar but as you put “he always sends me on the field work”. But a brawny physical archaeologist wouldn’t be much without a more brainy one to accompany him… so your father has found a new assistant to tag along Evelyn… together you begin to uncover the secret to the Garden of Eden. You don’t have a whip but you do have a grappling hook (because what else would you have in the 1920’s) oh and you don’t have a Fedora… you have a very period piece cap. This is apparently a bringing together of a former franchise of Adam’s Venture games… I have no experience with them so can’t really comment to that end but the game feels like an “inspired by” experience. The main character, Adam, is odd… clearly his father is an intellectual and there’s ample room there for the child of an intellectual to opt to become a more physical person…. but you’d think they’d have some of that intellect rub off on them… instead Adam routinely makes comments that would imply he has less than even average intelligence. This is then contrast with the puzzles in the game that require you work out sequences or connect wires and other such contraptions… something that would seem beyond the abilities of someone who seems as dim as Adam. Visually the game is fine… it’s not ground breaking but it’s not ugly… it does seem a bit outdated though with certain movement looking like your character is sliding on the ground rather than walking. I also experienced one room in which I ran and then stopped on a corner and suddenly couldn’t move off that spot… so glitches are about as well. Storywise it’s not terrible but it is full of cliche’s and is not exactly ground breaking. Overall it’s not a bad game… but I certainly wouldn’t be paying full price for it. The basic gameplay sees you moving from one room to another, collecting items where required and otherwise basically working out puzzles. The result is it feels like you are just overcoming obstacles to walking to the next spot… some of the puzzles don’t really seem to fit either… presumably ancient trap builders put puzzles on their doors but they just feel out of place. If you are feeling a lack of adventure games then this is a good option… it will probably fill that void well but there are other options out there to try first.