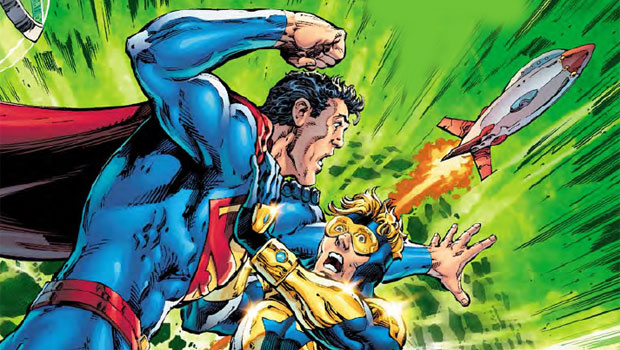 As the countdown to Action Comics #1000 gets closer, Dan Jurgens continues his engaging run of Superman that returns the time-hoping hero Booster Gold to the title as he attempts to find his time ‘lost’ ally who is endangering history by just being there. So as Booster investigates the whereabouts of Superman on the Watchtower, he encounters The Flash who believes this once former member of the Justice League is up for trouble. Needless to say, Booster does manage to defeat the Flash as he goes back in time to Krypton in order to stop Superman. Although a fun battle, this was a little out of character for the Flash but it’s a small moment in a fun story.

My father… and zod. Allies?! – Superman

Back in time, Superman successfully arrives on Krypton, however there is a disturbance in the time stream as he is hit by chronal energy which shows Kal-El a slightly different history of his birth world, including discovering that his father was an ally of General Zod. Elsewhere, Lois has a heartfelt moment for her father and wants her son Jon to have some involvement with his human grandfather which was caused by their meeting with Jor-El. The issue ends with Booster finally catching up with Superman, however the damage to the time stream has begun when a powerless Kal-El is discovered by Kryptonian guards.

Action Comics #993 was classic Superman at its best and Jurgens successfully delivers another fun issue of everyone’s favourite son of Krypton but more importantly, it was great seeing Booster Gold back in the DCU after his absence. Complementing the engaging text and story was the art by Dan himself which was finished by Joe Prado and Cam Smith who helped with the finishing touches. I also loved the full page panels employed by Jurgens, especially the close-ups that were filled with emotion and overall, the action scenes flowed well. However like the Oz Effect arc, there’s definitely more to this story than meets the eye and I’m placing bets on a parallel reality!

Not until I get the answer I came here for. – Superman