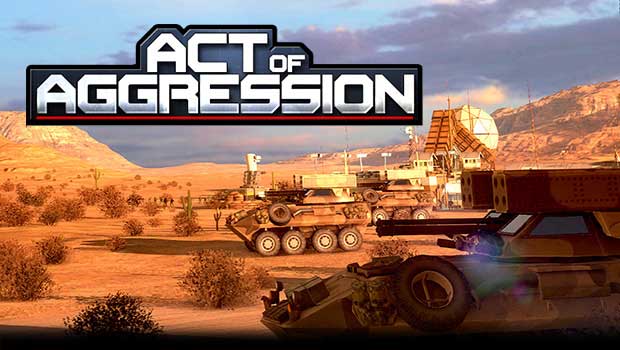 Summary: Classic RTS elements with a few new features, improvements for some, distractions for others.

Act Of Aggression offers to take us back to the days of the classic 90’s RTS games, but does it deliver?

Unlike many games (especially in this genre) there isn’t really a “tutorial level/s” section… you get thrown straight into the action with a small squad and your objective. Having said that, the basic controls are exactly what you would expect, your mouse is your main tool and you can group units and bind them to hotkeys.

But when you get your base things get a little bit more involved. Now admittedly my memory isn’t the best… but I’m fairly sure that the classic RTS games of the 90’s had one resource… you would set up your mining/farming operations and you would then just adjust what you made and how many by how much of that resource you had accrued. In Act Of Aggression a secondary resource is added to the mix, I imagine to add a bit of variety and perhaps to up the challenge a little, I actually found it a bit frustrating. Whilst it’s not overly hard to set up a refinery to gather the secondary resource… it can throw a spanner in the works of your production que, you see many units only need the basic resource (oil), but the beefier more specialized units require the secondary resource (Aluminium)… I won’t even start on the third resource (Rare Earth). For many gamers this might be a welcome additional challenge… something else to micromanage while you build your forces and decide the best form of attack, I prefer the 90’s approach of one resource to gather then work on strategy.

You may think that’s the end of it… not quite. The other “resource” is POW’s… now this one I kind of like. It’s a novel idea to be able to actually take enemy troops after defeating them, it’s even more interesting to then regard them as an alternative source of finances. I found myself unable to sell the POW’s to gain more resources, not through a fault in the game, but due to my own discomfort of giving the enemy back their troops. So there are pros and cons with the fiddling with the traditional genre elements. Beyond that, gameplay is basically what we are used to, build your base, get your resources sorted out, determine which units will benefit you most (or more accurately which combination of units) and then develop your force to a point where you can tackle your objectives. There are a nice variety of units to be had too which adds some lovely spice to the game. If you’re going to send out a battalion of tanks, make sure you have anti-air support, a few RPG wielding troops should help there. Need to cover ground quickly, take your troops up in a well armed chopper. There are certainly many interesting and impressive units to play around with.

The obvious comparison to make here is to C&C… and the overall feel is of a more contemporary (real world) story/landscape version of C&C… but a notable difference is the lack of FMV actors… or more accurately sets and visual performances. Act Of Aggression goes for a “news broadcast” and “briefing” style approach to the Video segues and to a large extent it works quite well… it feels a bit more “realistic” that your objectives are given to you in a pseudo CSI style dosier/intel run down type set up. The only down side is that I kind of miss seeing those performances… often hammy and frequently over the top, they were always fun, Act Of Aggression keeps things very serious and I can’t really fault them for it (I do suspect it comes down to it being much cheaper having some artists put together some matte paintings and such rather than set builders and lighting crew and the rest being required). In regards to the multiplayer… Unfortunately I can’t say. More accurately I wasn’t able to get into a multiplayer game, part of that may have been the users not wanting me to join their game but it also seemed to be related to Ping performance. When you enter the multiplayer lobby it tells you what games are waiting to start and how many players are required, upon selecting a game with an open slot you are then shown a list of all the waiting combatants and their readyness along with their connection details. I sat in a few lobbies waiting for a game to start, only to see other players giving up and heading off before eventually I did the same.

I’m not sure what the requirements are to start a multiplayer game that I wasn’t doing… if there was another button to click or whether it required everyone involved to have the same level of connection before it would even let them join the map… but it is still early days and as more people pick up the game I’m sure it will be easier to get into a multiplayer match (there were only a handful of people even on the servers on any of the times I attempted to join). But back to the original question “does it deliver?” Yes and no. I can see what it’s trying to do and there are moments of fun, but for me it just lacked a degree of polish or something that would make me eager to get to the next level. Instead progression felt like more of something I had to do rather than wanted to do. I will no doubt play more in the future, but it doesn’t have the same simple brainless fun that the classic C&C series did. A noble effort that many will find a great deal of fun in, whilst others might find it lacking something.