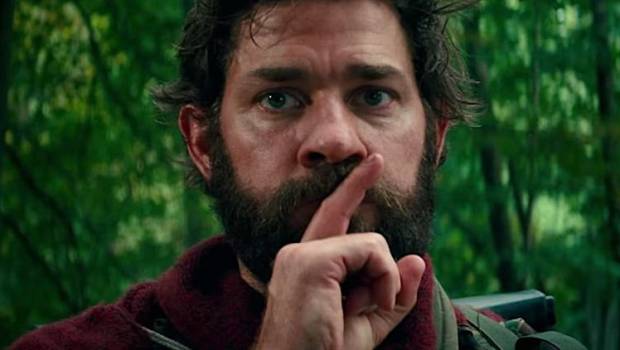 John Krasinski (The Office) stars in, co-writes and directs A Quiet Place. It is a horror film that lacks the articulateness to create unique, progressive statements for its characters. The title reflects the physical setup of an American family living a silent and technologically repressed life on a rural property. They are desperate to protect themselves from blind monsters with acute hearing. Krasinski plays a family man overcoming a traumatic past to preserve his family unit.

The film is deliberately muted in its form. It has subtitles as it characters employ sign language to communicate and avoid monsters. However, it is also hushed in its thematic meaning. Its silence unintentionally infers the containment of the family’s structure where its characters feel limited in their personalities. The constrictions ensure the archetypal family structure is flat and overly traditional compared to current pop culture additions in film and video games. Its arching narrative question is a generic one, asking how far a father will go to protect his children. For a horror film, it isn’t particularly scary before it can resolve this dilemma.

The film starts eighty-nine days into an apocalypse, where the family is silently collecting supplies, including medicine for their sick child. A small boy named Beau (Cade Woodward) is told by his father Lee (Krasinski) through sign language that he cannot have a toy rocket because it will make too much noise. Lee’s family also consists of his other son Marcus (Noah Jupe), his hearing-impaired daughter Regan (Millicent Simmonds) and his wife Evelyn (Blunt). After crossing a bridge, a terrible occurrence leaves the family wounded.

The story presses forward to Day 472, where the family is living on a farming property. Their activities are performed silently. Regan is angry that her father still doesn’t have a working hearing aid for her and that he excludes her from a fishing trip with Marcus. After Lee and Marcus depart, the monsters of the apocalypse arrive, which presses Lee to return to the house to protect his Evelyn who is heavily pregnant. Each member must show their resourcefulness to survive.

A Quiet Place is engrained in the narrative trope of preserving the family unit. This is a device where a family must overcome a traumatic memory to be reunited at the end of the story. The overly wholesome design of the family provides an overly sentimental examination of this trajectory. Lee and his family mourn, hold hands to pray before eating, and slow dance in the basement to music. The farm only adds to the quaint traditionalism where the children play board games and dinner is eaten in silence. There are also long stares into the abyss and teary close-ups are favoured over personality. The omission of dialogue and under-characterisation is a limitation of the silent form, preventing the generic line of the family unit from being subverted.

The saccharine tone is dated compared to the creative and political edge in Jordan Peele’s recent horror-comedy Get Out (2017). Peele humorously exposed the toxicity of a racist White American household. For once, an American film was unconcerned with preserving the family unit. Peele challenged modern Hollywood cinema by painting the White American family as the enemy. The adversaries also imposed major political implications. Comparatively, Place’s opponents are safe: monsters with sharp fangs and enhanced hearing, which are an inoffensive enemy to defeat. The ambiguity limits political and Biblical readings such as what faith means to the family.

Place is produced by Michael Bay, which accounts for the film’s conventional gender roles and penchant for video game devices. The film is overly sentimental rather than scary as Lee looks out into the nightsky thinking about the bridge incident. The indisputable love for his family makes his alpha behaviour, including excluding Regan from a father and son fishing trip, misplaced. We would understand the character more if Krasinski painted Lee as a cold bastard instead of a rather soppy, sentimental fellow.

The father and son fishing trip typifies the conventional male gender roles of Bay-esque cinema. After more than four hundred days into the apocalypse, Marcus is inconceivably unaware of the differences between loud and soft sounds. This marks a clunky piece of exposition for explaining the film’s sound rules to the audience. Similarly, the emotional conflict of Regan, the film’s only interesting character, is articulated by a male voice. The film juxtaposes the fishing trip with a shot of Regan visiting the bridge, but it is Marcus who outlines her feelings of guilt to Lee. At least the film employed a hearing-impaired actress to play Regan, which is a major positive.

The film mimics the video game The Last of Us (2013) but refuses to match its complex thematic ideas. In the game, the players are tensely forced to sneak past blind enemies called “Clickers” or they will be attacked. The film copies this concept so physical action and tension are sound-based. The monsters are blind but quick to react to noise. Regan’s impairment is also underlined through subtle sound changes, which is neat. Yet it’s bizarre that a film devoted to silence and selective diegetic sounds would use an intrusive music score to telegraph emotional cues. Similarly, the film’s jolts are provided by the types of conventional thumps found in derivative haunted house films.

Outside of their sonic hearing, the monsters aren’t interesting. We never learn about where they’ve come from or what they want aside from eating people. The naturalistic rural setting is photographed by Charlotte Bruus Christensen (Far from the Madding Crowd, 2015). The overgrowth of the property and the empty store resembles The Last of Us’s decor. Lee’s aesthetic also mirrors the game’s lead character, Joel, but Place omits the bleak psychology that saw the game distort the definition of parentage to become a new classic.

In the game, Joel has lost a child himself and he grows increasingly possessive of a girl he helps across the wasteland. His violent actions to protect her gather meaning over their journey. Comparatively, all Place must resolve is whether Lee, who cries for his children, loves his family. If it weren’t for the dialogue being expressed in sign language the admission would be dull. “I love you. I have always loved you”, he says. Riveting, Lee. The revelation about his character isn’t unexpected when his emotional sensitivity is apparent.

As a film about changing gender roles, A Quiet Place is thematically unresolved. It is oblivious as to how to fully utilise Emily Blunt. She transformed into a formidable action star in Edge of Tomorrow (2014) and Sicario (2015). The latter involved her in complex action scenes and it criticised male bureaucrats for withholding information from her. As Evelyn, Blunt is visibly emotive and sincere, but the character has no backstory and few traits. Evelyn’s pregnancy demobilises her and keeps her indoors to oversee laundry and briefly hide from a monster. Thankfully, Regan features in the finale, but its unintentionally humorous how much the resolution echoes Tim Burton’s Mars Attacks! (1996).

Evelyn’s pregnancy is also handled in adolescent fashion. The noise factor signals a major obstacle for the family. However, the ludicrously fast child-birth had the audience howling. The moment is also spoilt by cutting away from the bath when giving birth. The scene could have brilliantly parodied Scientology’s doctrine about women giving birth silently. Improbability mounts when a monster doesn’t hear her enter labour long before fireworks are launched to distract it. Similarly, there’s a silly gag shot of a newborn baby being placed into a box with an oxygen mask, which is implausible and made me laugh. Finally, a cheesy end frame forgoes the realism of Evelyn’s physicality, further highlighting the film’s adolescence.

A Quiet Place is loaded with inconsistencies that weaken its verisimilitude. It’s questionable how far the family lives from the store since they travel on foot to the farmhouse. Where do the various newspapers come from if they live away from the city? Since Lee has cameras measuring the proximity of the monsters to the property, is it essential to always sign indoors? Wouldn’t one show urgency towards stragglers on a bridge during an apocalypse? If Evelyn is pregnant, how did she and Lee sleep together without making any noise? Imagine the comedy gold in a scene exploring that problem. Some clapped at the end of the screening but others immediately questioned these types of improbabilities.

Outside of its gimmicky sound concept, copied from a video game, Place does not have interesting thematic questions to resolve. Its dramatisation of the restoration of the family unit is conventionally drawn. Each member shows their bravery but without personality or deep personal conflict besides Regan. Instead, their relationships are schmaltzy, and its less scary than the pre-release hype suggests. There are jolts but a truly scary film would make us care for the characters. A third act would also have enhanced Evelyn’s agency and elevated her over a limited mother archetype. As it stands, the film is muted in form but also in its depth compared to progressive and subversive horror stories from various mediums.

Summary: As it stands, A Quiet Place is muted in form but also in its depth compared to progressive and subversive horror stories from various mediums.