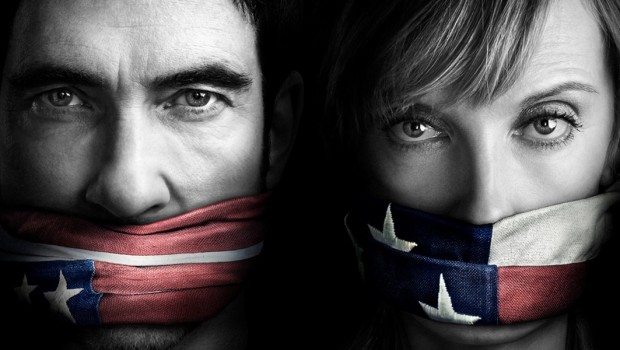 Summary: Hostages is a hit and miss affair that unfortunately is 15 episodes too long

Hostages is a very interesting drama series but has trouble keeping the main story alive in this convoluted and a little lengthy TV series about a surgeon (Toni Collette) who has forcibly agreed to assassinate the President of the United States, Kinkaid (James Naughton) after rogue FBI agent (Dylan McDermott) takes her family hostage. If the premise may sound a little familiar, that’s because it is based on an Israeli TV series but changes the setting to the United States. The series also has this Hollywood blockbuster feel to it due to Jerry Bruckheimer’s involvement that definitely makes it a slick production. The main protagonist of the series is Dr. Ellen Sanders that is played exceptionally well by Australia’s very own Toni Collette who is a well-respected thoracic surgeon in Washington DC and when the president is scheduled for an operation due to a non-malignant tumour, the White House believe that the head of state is in good hands.

Unfortunately her life is thrown into turmoil when rogue FBI agent Duncan Carlisle (Dylan McDermott) strongly believes that the death of the president will be the best outcome for the country, not to mention his mission complete. As a result, he takes Sander’s family hostage and threatens to kill her family if the president survives on the operating table. This leads to a very suspenseful situation for Dr. Sanders and her family but as the series progresses, we soon learn that her husband (Tate Donovan) has his own secrets such as the relationship with his assistant. There are some great little twists throughout the series like this but for the majority, they feel like filler to the main theme of Hostages. Basically, they have been added to help draw out the story.

While the premise of Hostages sounds almost plausible, the series definitely drags and for the most part, the viewer must suspend their disbelief as there are quite a few plot holes in the storytelling. Unlike Homeland which is quite a compelling and almost a believable drama series, Hostages flounders around the premise a little too much, especially as its producers drag out the assassination attempt. However if the creators went down the movie route opposed to a TV series, the story would have been compacted into a more realistic and streamlined story. This is not to say that Hostages is a bad TV series but the premise doesn’t mesh too well. Nonetheless, the acting by all those involved actually does the story justice and definitely gives the viewer some interesting questions about how terrorists may strike. The series also ends quite satisfyingly as well which is another bonus. The themes behind Hostages makes for a very interesting story, however this premise is drawn out for 15-episodes too long which does destroy some of the tension. Thankfully the series is extremely well presented and features some stellar acting by all those involved, especially Toni Colette and Dylan McDermott. Unfortunately when you have powerful series like Homeland that does share some parallels, Hostages fails to meet these heights due to the bloated storyline.